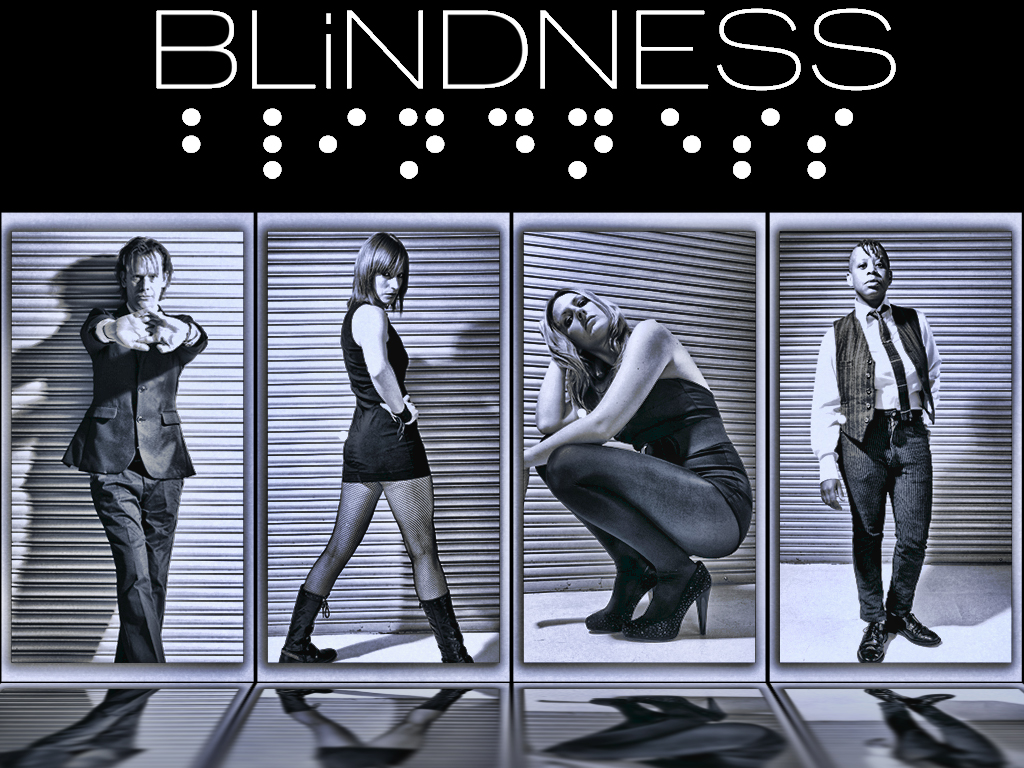 “Dangerous, swaggering, dramatic, dark and sexy” is not a description you’d employ to describe the music of Mumford & Sons, but when it comes to writing about London four piece Blindness it should be MANDATORY!

Featuring Beth Rettig on programming/vocals, Kendra Frost on bass, Debbie Smith (ex- Curve and Echobelly) on guitar and Alex Lutes (ex Nightnurse) on drums, Blindness produce the kind of music that’s endowed with a miasma of menacing, seductive sexuality replete with explosive searing guitar riffs, throbbing bass lines and thunderous drumming. If you like filthy electro beats glorious guitar squall and great driving pop hooks, ice -cool vocals then you, like us, may lose your heart to Blindness, after all they do say love is blind ( it’ sure as hell ain’t deaf!)

We had a chat to the band who have recently released the utterly wonderful  ‘Glamourama‘ via Club AC30 records and here’s what they said.

VP: So, without making Beth seem like some sort of musical Rupert Pupkin ;) is it true that she kept turning up at gigs asking Debbie to play guitar in her band ?  Is this how the band started?  When did Kendra and Alex join?

Debbie: It is completely true.  And she bribed me with brownies too.  It took a few gigs, and about 15 brownies before I caved.

Beth: Yeah, it’s pretty much true.  Debbie was playing with SPC-ECO at the time and I’d gone to see them and the Nuns a couple of times.  One evening, I got drunk enough to pick up the courage to go and ask if she’d be interested and fortunately she said she’d be up for giving the tracks a listen…

Kendra: My old band was winding down and Beth invited me to come and make noise with her and Debbie.  I like to think I was poached!

VP: Your new single, the fabulous Glamourama has just been released, what was the inspiration behind the song?

Beth: Er… I’m not great at talking about the songs’ meanings…  In a nutshell, it’s about identity.

VP: It’s been released by AC30 on vinyl.  Does it feel much more of a tangible event when a song is available on a physical format?  What do you think the reason is for the resurgence in the popularity of vinyl, which many predicted, would have been as relevant as a Tory pre- election promise by now.

Debbie: Physical formats, especially vinyl are tangible appreciations of music.  They’re kinda talismanic; they can be looked at as artefacts and be collected.  It’s so much nicer to have a big old slab of vinyl in your hand, with nice artwork and sleeve notes you can read whilst you’re listening to it than to just download a song, I mean, a download isn’t ‘there’, is it?  And you can’t skin up on an mp3.

Beth: I think there are enough people who still want something physical to collect when it comes to music.  CD is on the way out.  Vinyl is the better sounding format, the artwork is more enchanting.  It’s more romantic.

Kendra: There’s something more legitimate about a physical release, especially one on vinyl, in the same way a Polaroid or print from a negative possesses that extra feel of authenticity.  I’m still a CD girl at heart- I buy music on CD and then burn it to iTunes.  I miss reading and re-reading inlays until they are lovingly scuffed about the edges.  There’s definitely an element of nostalgia as well as ownership that retains the appeal for me.

Alex: People wanna hold something in their hands.  To read the Cat number in the back, to smell the vinyl and finally drop the needle on the record.  Isn’t that what it’s all about?

VP: You gained a reputation as an impressive live band is it difficult for bands from London to get gigs further afield.

Debbie: Yes, especially if you don’t have your own transport.

Beth: Yes.  Mainly because there’s no point in making the journey to play to no-one so you need to find a promoter who’s willing to put you on at either a club night or as support to a band that will bring a crowd.  Unless, you have a following around the country, of course.

Kendra: It’s certainly tougher if you’re doing a fair whack of the gig promotion yourselves outside of town.  It’s down to the night and the promoter at hand really.  I’d love to play Manchester again- we played a gig there last year that was packed to the rafters and one there a month or so later to a bloke and his dog.  Not that I have anything against that bloke or his dog, but…

Alex: It is difficult, but you do your best and look out for any way to play anywhere.

VP:  I won’t ask about musical influences as let’s face it every interview in the world ever has that question.  Instead, I’ll ask was there a particular “Boo Radley” style moment of clarity when he though…”Yes I must form a band”

Beth: I just always wanted to growing up – hence the move to the UK – It’s just part of who you are and now I just don’t really know how not to.

Kendra: I had classical guitar lessons when I was younger- I wish I’d been able to keep them up!  – and happened upon a battered old Fender at school.  There was only one way to go!

Alex: I started playing drums at 13 years old.  I know of nothing else.

VP: What’s next on the agenda?  Do you have enough material for an album?

Debbie: An album, some more gigs.  Buying a small Caribbean island.  The usual.

Beth: We’ve got enough for an album.  That’d be great, it’s just getting it recorded and mixed.  I second the Caribbean island, too…

Kendra: We do. I really want to get on the 2013 festival circuit.

Alex: An album would be great!  We’ll just have to wait and see.

VP:   How much does technology play a part?  Years ago when a Mac was something worn by men of questionable motivation and a PC was an officer of the law, you’d need a fair wedge of money to record and release music.

Beth: It’s had a big impact.  It’s a lot easier to get information and reach people.  It plays a huge role, and it’s made it possible to do a lot of stuff, promotion, self-releases etc on your own but, it’s still hard to reach a lot of places without industry back up.  In terms of recording, it’s much easier, at least to get demos done.  If I was more knowledgeable in engineering, we’d be better placed to do it all ourselves.   It’s certainly easier to discover new music, though.

Kendra: This is where digital technology comes into its own for me.  Accessibility in this context is a beautiful thing!

Alex: Studio’s still ain’t cheap, if anything, they’re even more expensive now they have all the gadgets.

VP:  On a personal note, how do you listen to and discover new music, on line?  Radio?  Music press?

Debbie: I don’t listen to a huge amount of new music, when I do it’s usually a recommendation from a friend or chancing on a band whilst online.

Beth: Suggestions from friends, a bit from press, radio, podcasts.

Kendra: Through recommendations from friends and live performances- especially festivals.

Alex: I like to check out The VPME, for all my recommendations.  (Is the right answer! ;))

VP:  Debbie, Miki Berenyi  told me  she’d been in a studio with you to record some tunes along with the likes of Beki Bondage and it was great fun .. How did all that come about?

Debbie: Well, my mate Sean has this band called Hard Skin, which is a parody Oi band that gets taken far too seriously in some quarters. Anyway, they wrote an album to be performed by female vocalists, and they asked a load of people including Joanna Newsom, Miki, Beki Bondage, Liela from Duke Spirit and for some reason, me. It was fun, there was a load of booze and I may well have been a bit tipsy when it came to recording my bit.

VP: Finally a five-word soundbite to sum up the sound Blindness make…