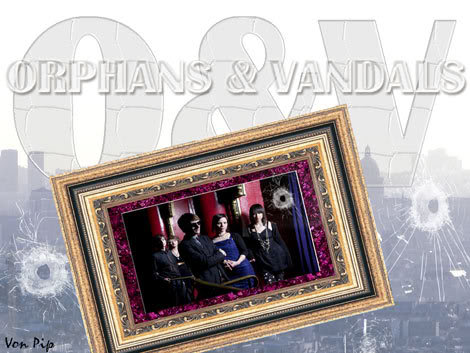 Orphans and Vandals are one of the most unique bands I’ve heard for quite some time; their music is shocking, disturbing, brilliant and compelling. It will challenge your prejudices and draw you in to a murky, unsettling world that quite frankly, makes Nick Cave’s darkest musings seem about as sinister as a particularly upbeat episode of Balamory. You may be moved by its poetic nature, you may shocked by its content, but you will certainly never be bored, for their music holds a dark fascination which is impossible to turn away from. Orphans and Vandals create a tone of doomed grandeur, of rebirth and decay, like an Emile Zola novel reinterpreted and set to music. It deals with the disconnected, the dissolute and the lost but conversely is not without hope.  Al Joshua’s poetic streams of consciousness conjure up moods and atmospheres with a turn of phrase or an intonation that Pete(r) Doherty would kill for and brings to mind TS Eliot, William Burroughs, Nick Cave and even Mark E Smith.

Following up their critically acclaimed debut single, the 8 minute epic that is  “Terra Firma”, they are set to release their debut album “I am Alive And You Are Dead“.  It’s a work of spellbinding brilliance using a wide array of instruments including complex arrangements of viola, violin, harmonium, guitars, drums, clarinet, glockenspiel, and musical saw to back up the haunting vocals.  As previously mentioned  there are suggestions of,  and nods to,  The Velvet Underground, Nick Cave, Bob Dylan, William Burroughs and Steve Reich – all of whom the band cite as influences – but the songs are so perfectly crafted, that they come across as something quite unique. Each listener will doubtless draw their own conclusions.

We spoke to Al about the band, who 6 Music’s Tom Robinson recently described as “The single most  exciting band I’ve encountered in a long time”

AL : I had been a touch waylaid.  Desperation, nausea and failure shed new light on life.  I ran away to consider things and when I came back I was nobody’s wife.  Merciless and full of contempt, I decided I didn’t care about anybody else and would do only things which would excite and interest myself.  Raven and I drank all the whiskey someone gave him as a present one night and decided to start a band and then luck sent us the girls.

VP:  Orphans and Vandals? Does the name have a special significance?

AL: I’m not sure.  It was the title of a song I heard and later we stole it for our name.  I thought about calling the band Ghost of a Chance.

VP: Would you say your work is influenced by other musicians, or is  literature, poetry and spoken word  more of a significant  factor?

AL: I have stolen indiscriminately from music, writing, painting, films, anything.  I’ve walked around the city with a dictaphone looking for ideas, recording noise and random conversation.  If there is something good to steal, I steal it.  It all goes into the grinding machine.  But whatever different sources we might steal from, what Orphans & Vandals do is music.  I don’t know anything about poetry or performed poetry.  The words are just part of the music.  And I would never think of it as spoken word.  Sometimes I use intense fragments of ordinary voice when I’m singing, because singing is just using your voice in a musical way.  Voices talking can sometimes be very beautiful and melodious, full of microtonal changes and the notes in-between the cracks.  Harry Partch composed for voices using microtonal intervals and it sounds a lot like a weird kind of talking.  Steve Reich used recorded fragments of speech as the basis for pieces like Different Trains and It’s Gonna Rain. Also, I knew a poet once when Ashley and I lived on an ex-Mersey Ferry on the Thames.  It was mostly derelict.  There was a caravan that had been winched onto the top deck and this Poet locked us in and showed us his small and withered privates even though we asked him not to.  He had a drinking problem and smelled funny.  Who wants to be a poet?

About influences again though, I don’t pay much attention to contemporary bands.  Except the ones with pretty boys and cute girls.  But that probably doesn’t count as the things I would be interested in doing to them do not include listening to their music.

VP:  Lyrically there is beauty but there is also a dark side,  which at times can disturb, confuse, provoke and shock,  what sort of subjects inspire you to put pen to paper?

AL: Francis Bacon said he wanted his paintings to assault the viewer’s nervous system, and so return them back to life and consciousness more violently.  I’m just trying to do that for myself.  I’m looking for images and sounds that fray my nerves.  Disturb, confuse and provoke myself is exactly what I want to do.  Because it wakes me up and brings me back to life.  And if it does this for me, then it will for a few other people too.  Out of twenty people, nineteen might not like us, but for one person it will ring out like the right note being played in the right room and suddenly resonating.

VP:  There’s also quite a bit of ambiguity within the prose,  split perspectives …was this intentional, to enable the listener to take their own meaning from the songs.

AL: If you don’t like the way the circuits light up, rip out the wires and disconnect the cables.  Use chance and instinct to re-wire it.  You have to short circuit logic to get to the heart of the matter.

VP:  Some of the characters within your songs seem to be deeply disaffected souls who on one hand seem disconnected but on the other,  appear to have an urge to take extreme measures, almost a wish to be savagely shocked out of inertia.  Do you feel that today’s society needs to reawaken to connect with who they are once more? Will the recession light the fuse?

AL: I don’t know anything about society, but the first part of what you just said is exactly right. You have nailed it to the wall.

VP:  What have been the most exciting experiences for the band thus far …

AL: Raven got into a car with a stranger who offered him chocolate when he was 13.I went into convulsions on the upper deck of the night bus. Quinta won a high stakes bet involving bigamists, midgets and a trip to Tangier. Francesca asked for just one more leetle drink and then painted the town black and blue and red. And Gabi gets excited whenever she even thinks about oranges.  Funny, she can’t stand the taste or smell though.

VP:  When is the album due out and will there be a series of gigs?

AL: The album is out officially on April 27th, but the launch party is on April 23rd at Madam Jojos in Soho and the album will be for sale there on the night.

A proper series of gigs would be good.  I think we’re trying to sort a series of dates out now.  Keep an eye on our gig listings on myspace.

VP:   What’s the audience reaction been like when you’ve played live, do you think some are taken by surprise?

AL: The audience reaction has been mixed.  Ha ha ha.  My favourite so far was Club NME at Koko.  Within a couple of minutes of the first song half the crowd started booing and shouting faggot and stuff.  So other people started cheering trying to drown them out.  It was fun.  I guess not everyone likes to be surprised.  We haven’t been beaten up after a gig yet though.  Maybe we should quit while we’re ahead.

VP:  I   normally finish with “describe your music” in five words although I think in your case we may need more. ……

AL: I find it difficult to describe music in words.  You have a go.  Forget five words.  Do it as a haiku.  Or as a knock knock joke.  Go nuts.  This could be fun..

VP: Erm, ok but I’m sticking with the five word thing “A shock to the senses”