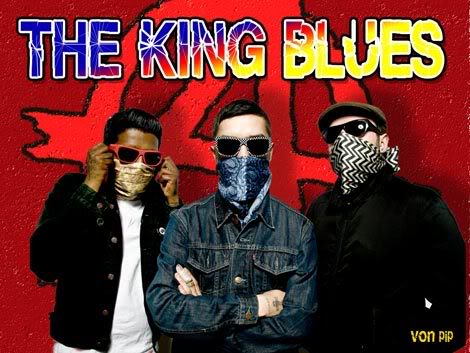 The King Blues are ;

Many bands are formed purely to entertain you, to enable you to dance and boogie your cares away, whilst lightening your mood as well as your wallet.   This is all well and good and everything has its place, but in the grand scheme of musical history do any of these bands really matter? You get the impression that when such groups reach the end of their shelf life its members will inevitably seek out careers presenting kids TV, acting and, if all else fails, pop up on “Celebrity Big Brother”. Possibly in a final ironic twist, they may become a judge on the “talent” show which spawned the band in the first place.  (Now I know exactly what “Pop Will Eat Itself” means!)

Other bands are formed by people who really love music, who share a common goal, people who exist to write something a little more real and something of value.  They write about things which you can relate to, things which move you and ultimately, can encourage you to look at the world in which you live, a little differently. They give you hope and can inspire you.  Because the best bands, the bands that matter, are the bands that write from the heart, not the wallet, they don’t have a “formula” designed to grab themselves a No 1 single, they don’t regard what they create as simply a “product” or seek fame for fames sake. They do it because they love it and because they have something worthwhile to express.

The King Blues are one such band, a band who follow in the grand tradition of political troubadours such as Joe Strummer, Billy Bragg, Elvis Costello and Ewan McColl  They write with openness and honesty mixing their own potent ideologies with the dirty romantic urban poetry of say, Shane McGowan, or Mike Skinner.  At times conjuring up the ghosts of the Clash, The Pogues and The Specials, the King Blues shout from the roof tops about things that matter, and about what they see as wrong with society but never appear preachy or pious. In fact they sound like they are having a ball putting the world to rights. Their stories are told with cheek, warmth, compassion and humour,  there are no simulated causes here, they are indeed the real deal, and prove the one thing you can’t manufacture is soul !

“Save The World, Get The Girl”, The King Blues follow up to “Under The Fog” kind of blind-sided me, it seemed to come from nowhere and successfully hijacked my CD player for the latter part of 2008. It is now quite rightly the VPME’s (joint) record of the year, an accolade it richly deserves, for it is an album full of passion, heart, fire, anger empathy and wit. We spoke to the bands front man Itch about the King Blues adventures in 2008

VP: What’s the story behind the bands formation?

ITCH: We formed around 4 years ago. It started off as a solo project but more and more people started getting involved and we eventually evolved into a 6-piece band. The first few years were spent as an acoustic 2 piece, trying to play in the punk scene which wasn’t easy as most people were put off by the words acoustic and ska. So we started opening up our own squats, hooking up the electrics and wheeling in a PA so we were throwing these massive free parties just to get people to see us. Once they saw us and realised we weren’t your usual shoe gazing acoustic band it became instantly easier.  We then took the idea one step further and strapped the PA to the back of a giant tricycle so we could play while moving which we did at various protests and marches which got us noticed by a lot more people.  Having been accepted and championed in the punk scene we ventured out of our comfort zones again and started playing hip hop nights, reggae nights, acoustic nights and just started spreading it round. We released our first album independently after support at Radio 1 and re-released it along with our latest album on Field Recordings/Island.

VP: Where did the name come from?

VP: Billy Bragg once sang “Mixing pop and politics he asks me what the use is…”you’re obviously a band with a social conscience with something to say. how would you address that question?

ITCH: Music has the power to touch people like nothing else, it has the power to unite, to breakdown borders and boundaries and to make us realise that we are all the same. Every generation has had artists that reflect what is happening socially and politically at the time, songs become anthems of movements and help to educate, inspire, unite and motivate people. Music touches the heart, which is where our politics should grow from.

VP: Your latest album “Save The World, Get The Girl” is full of great tunes and razor sharp lyrics. It also contains one of my songs of the year “What If Punk Never Happened”. What inspired that song? What do you think punks’ legacy has been?

ITCH: I wanted to pay tribute to a lifestyle and culture that I’ve made my own for most of my life. The pure, tribal, primitive values of punk rock are important and powerful. That 30 years later, scenes have sprung up literally all over the world, not just the first world, is testament to its underlying truth. Punk’s legacy for me personally, has been to empower myself, make the best of what I got and to unite with others. I truly believe it has the power to affect real social change.

VP: What would you say are the five most important songs ever written?

ITCH: Jamie assures me the 5 most important songs are

VP:  The “Credit Crunch”, Hello Obama, bye bye Bush. What have been your highlights and lowlights of 2008?

Releasing 2 albums and 2 ep’s, getting rid of Bush, literally smashing EDO (Brighton based arms manufacturer), playing outside Tony Blair’s speech and drowning him out, Reading/Leeds & Glastonbury for a 3rd year in a row, playing the world against war march. As a band we had a pretty good year, I can’t think of too many lowlights.

VP: You recently wrote on open letter to Gordon Brown on a Billboard in Shoreditch, what was the thinking behind that?

ITCH: We were basically given an early Christmas present by our label which was a blank billboard in central London . We were told we could put whatever we wanted on it, whether it be details of the album, or the single, or anything else. So we decided to write an end of year letter to our unelected leader for all to see. It took us 3 hours to do on a freezing cold morning and I only finished writing the words literally on the morning we did it because it was all very last minute. We expected it to get covered up, or graffed over as soon as it went up, we thought people would take it as a free for all, but it went completely untouched for the entire 2 weeks it was up there. It stuck out like a particularly sore thumb so everyone was stopping to read it, I was really proud of that.

VP:  How life in London under Boris, worse?  Better? No change?

ITCH: I try to have the mentality that the government doesn’t exist, neither does authority and I therefore have free reign to do what I want, so I just pretend Boris isn’t really in charge and live happily.

ITCH: The Gaslight Anthem, The Skints, Dirty Revolution, Jimmy The Squirrel, Sabac, it’s been a good year for music.

VP: The internet has changed the face of music forever, but has it changed it for the better?

ITCH: Personally I don’t think so, I think it’s just too easy to get music now, so if someone doesn’t like an album straight away it gets deleted, rather than having the time to grow on them, I’d have missed out on London Calling and Ziggy Stardust if I’d downloaded them free and given them one spin. It really cheapens music which is sad, there was something tribal about being passed a tape of some band it was really hard to get, there was a feeling of being a part of something, now you’re just another myspace friend, maybe I’m old and cynical.

1. A never ending plate of pancakes

3. To be able to drive without having to learn anything

4. For lyrics to write themselves

“My Boulder” By The King Blues