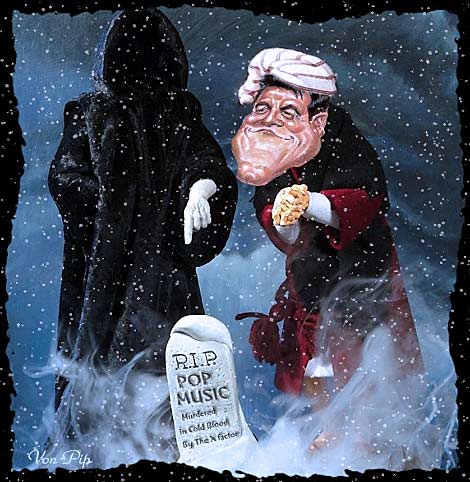 Christmas songs love ’em or loathe ’em they have become a staple of the festive period . Here are some new songs, old songs and videos which kind of sum up Christmas at VP Towers . We love Christmas and are positively gushing with  festive joy, so let us be the cream on your Christmas pudding,  the mince in your pie as we  fill your stocking,  empty our  festive sack, roast our chestnuts on your open fire and  vigorously polish our enormous baubles. Oh and f**k the X-Factor , remember 20 million watched that steaming pile of shite but 40 million didn’t .  Let’s not let it ruin Christmas. ;)

If you’re taken with an overwhelming urge to purchase a couple of  Christmas albums  this year then make sure “The Indiecater Christmas Album 2009” and Bob Dylan’s festive offering ( scroll down) are on your list.. As it’s the season of goodwill you could also download F*cked Up’s version of “Do They Know Its Christmas” ( featuring Bob Mould, Tegan And Sarah, Andrew WK, Yo La Tengo). All proceeds will go to benefit three organizations in Canada working to bring to end to the epidemic of missing and murdered native women.  As it’s for charity Fucked Up’s Damian”Pink Eyes” Abraham admitted he would have even allowed Bongo to join them on this version -“As terrible as I find [Bono’s] music and as reprehensible as I find him as a person,” he said, “I would definitely have had him on.” But thankfully he didn’t so go and download it !  HERE


Meanwhile JC  celebrates Christmas , no not that JC , this JC !

Julian Casablancas- “I Wish It Was Christmas Today”

The Hives vs Cyndi Lauper –A Christmas Duel

Emmy The Great “Christmas In Prison”

The Long Blondes-“Christmas Is Cancelled”

Those nice folk at Ruff Lane Records have a whole FREE festive EP for you to download , as well as featuring Lucky Soul’s fab cover of Mud’s “Lonely This Christmas” there are 3 other tracks for you to grab. Simply click the arrow pointing down on each track on the player below to download

Obviously Xmas wouldn’t be the same with out…


The Pogues-Fairytale of the New York (Top Of the Pops)

This year sees the release of Bob Dylan’s first ever festive album, proceeds from the sale will be devoted to feeding homeless people in every territory in which it is released ( click pic)

The Dr Who Xmas Special is now part and parcel of Xmas Day and this year David Tennant departs to make way for the 11th Doctor, Matt Smith …

And one for me dear ole Mum ;)