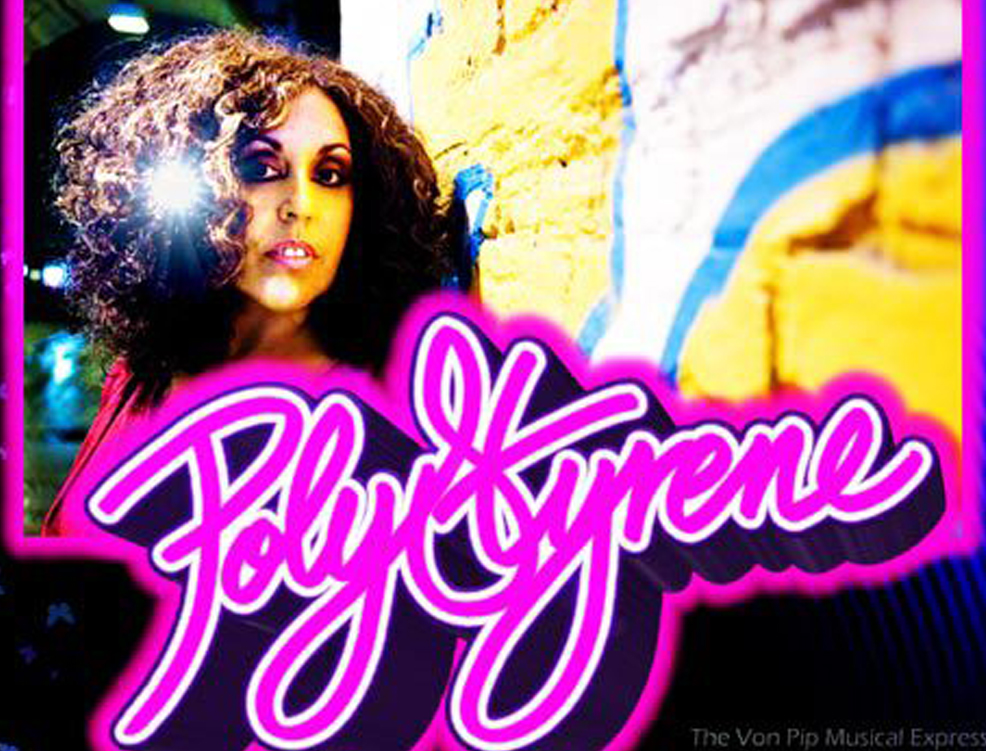 I missed the original Punk explosion, I was aware of it, aware my parents hated it with a passion and that Punks generally looked like futuristic urban warriors and had upset that nice Mr Grundy fellow on TV. But this was mere background noise to my childhood, I had weightier things on my mind such as recovering from the trauma of discovering that the square-jawed poster boy of male heterosexuality, Action Man, actually had no penis. Punk may not have changed the world, but as I grew up its legacy certainly helped shape my world. Whilst the music itself often ranged from the sublime to the ridiculous I  embraced some of the more positive doctrines that emerged from it’s ashes. The questioning of authority and ‘societal truisms’, the fact that females in bands were not portrayed as empty vessels but were strong assertive and sometimes a little scary, and of course the D.I.Y ethic that anybody could form a band.  Punk is often cited as producing more female musicians/singers than any other musical genre and it certainly created its fair share of memorable icons, Siouxsie, Pauline Murray, Debbie Harry,  The Slits and of course X-Ray Spex’s Poly Styrene.

X Ray Spex were a strange band in many ways, possibly the first truly new wave band to emerge from the movement and what stood out was their intelligence and choice of subject matter.  Whilst the Pistols inspired many and had created thrilling, entertaining but ultimately some may say, futile chaos for it’s own sake, X-Ray Spex were predicting the future and providing incisive critiques on many of the topics that still trouble us today, control by consumerism, environmentalism, and the pressure to conform. Their album ‘Germ Free Adolescents’ is regarded by many as a punk classic and one which I still play loudly and often to this day, so when I heard Poly Styrene was set to release a new album I was simultaneously excited yet also slightly apprehensive.  You always worry when an iconic band or singer releases new material that it may somehow tarnish their legacy.

After listening to Poly’s latest album ‘Generation Indigo’ such fears are quickly allayed, and really given her track record maybe it should be no surprise that Poly captures the Zeitgeist perfectly producing an album very much rooted in the here and now. She wisely chooses not to revisit her punk root in terms of her vocal performance and instead delivers a vibrant contemporary album that mixes wit, idealism and wisdom as she turns her x-ray focus on a myriad of topical themes, including ethical footwear, consumerism, social networking and the Iraq War.  Musically at times it could be Debbie Harry fronting New Young Pony Club, although the very fact that it encompasses such an eclectic range of styles, including dub, electro and pure power pop makes  rather difficult to nail down with such blithe comparisons.  On knob twiddling  duty is Killing Joke’s ex bassist Youth who  proves that when it comes to masterful polished production, Mark Ronson’s got a lot to learn, as he finds the perfect balance, between subtlety and slickness.

At it’s heart ‘Generation Indigo’ is an album full of warmth, wit, fun, spirituality and hope. All attributes which we hope will see Poly triumph over her biggest battle yet after being recently diagnosed with cancer.

Poly found time to answer our questions ahead of the album release, which she has said has been a hugely positive factor in helping her come to terms with her current situation.

VP: Before we discuss the album – how are you? You recently announced you’d been diagnosed with cancer which must obviously be a terrible shock.  When I mentioned we’d be speaking with I was asked to pass on good wishes and the hope that the treatments are going well.

POLY : Thank you.  I’m trying to stay positive and doing my best to battle it.

VP:  You’ve said that your new album ‘Generation Indigo’ has been a ‘very positive force’ in your battle.  How did this album come about, were you approached, were the songs already written?

POLY : I’d basically demoed a track called ‘Code Pink Dub’ and when my present label Future Noise Music heard it, they asked if I wanted to do an album.  This particular track had been written at the time of the war in Iraq, but a lot of the tracks were written after, some after the Roundhouse show in 2008.

VP: I was quite excited to hear Youth was producing the album and upon hearing it I haven’t been disappointed, it’s what you might call a triumphant return.  A lot of musicians talk of producers pushing them and helping them ‘find that extra yard’ ,  What was Youth like to work with ?

POLY : It was definitely a pleasant experience working with Youth.  I went in with the lyrics and the top line melodies and Youth added his musical input.  I had never worked with another producer as I’d produced all my previous work myself.  I enjoyed working with him, so it was a good collaboration.

VP:  The album deals with a lot of contemporary themes, ‘Virtual Boyfriend’  for example is a critique on how modern technology  has affected our own interactions.  What’s your overall view of technology both in everyday life and also how it’s changed things for musicians?

POLY : I think that the internet or social networking sites probably make a safer place for girls to date, but we have to be careful not to lose too much human contact in relationships, a hug is essential and I don’t think ending a relationship by text or on email is cool.

On world and political matters, there is obviously a wealth of information on the internet and as we’ve recently seen in Egypt, peaceful movements or change of power can happen through the internet.

For musicians, the internet has made them less dependent on the majors and the old models, but at the same time, I think they need to do more as there is so much more to cover.

VP: When Punk first exploded onto the scene, it certainly had the effect of washing away a lot of the excesses of millionaire prog rockers, and in a sense democratised music  with it’s anybody can form a band DIY ethic ?  What was it that first attracted you to the scene?

POLY : Exactly that, that you could just get up there and play music, is what really attracted me to the scene.

VP: Punk also is widely regarded as the genre that levelled the playing field  for women and allowed them an equal footing with men. People like yourself  Siouxsie, Pauline Murray, The Slits,  weren’t presented as sex symbols but as  woman who were empowered by Punk. When you see today’s highly sexualised performers does it seem like Punk actually didn’t change very much at all, and that the old order was quickly re-established?

POLY : Definitely the performers are very highly sexualised now. Punk came along and was more about what you do and not selling yourself as a sex object, although it does seem that not a lot has changed and beauty and sexuality is seen very prominently in the music industry.

VP: Now you seem to be a icon for young women, Beth Ditto, Kathleen Hanna, Kim Gordon and Karen O have all held you up as an inspiration. What advice would you give to any female musicians going into ‘the business?’

POLY : Just try and be true to yourself, and think about the content of your musical output.  Although it isn’t always easy to get inspiration, content is important.

VP: You’ve said in the past that, for you at least punk was destructive, in what sense did you mean?

POLY : It just had some dark energy surrounding it, especially when girls were on dog leads, with their boyfriends pulling them on the leads, that’s what I meant re some negativity…dark energy around it and also the fact that there was no future, the philosophy of it was that there was no light at the end of the tunnel.  A bit doom and gloom.

VP: As we’ve mentioned ‘Indigo Generation’  is very much rooted in the here and now, given the recent global economic meltdown, and your own previous wishes to find an alternative lifestyle, do you think we have missed an opportunity to do something radically different – It seems like it’s business as usual for the banks once again.

POLY : Banks will always be in business, some of them can be quite charitable as well.  I know for a fact that my friend presented something to Barclays and they didn’t want any publicity and it was for feeding children in India.  We have to remember that banks are there to serve the community, and its fine for people to make money provided they put something back.

VP:  If you could sum up the album in five words – what would they be?