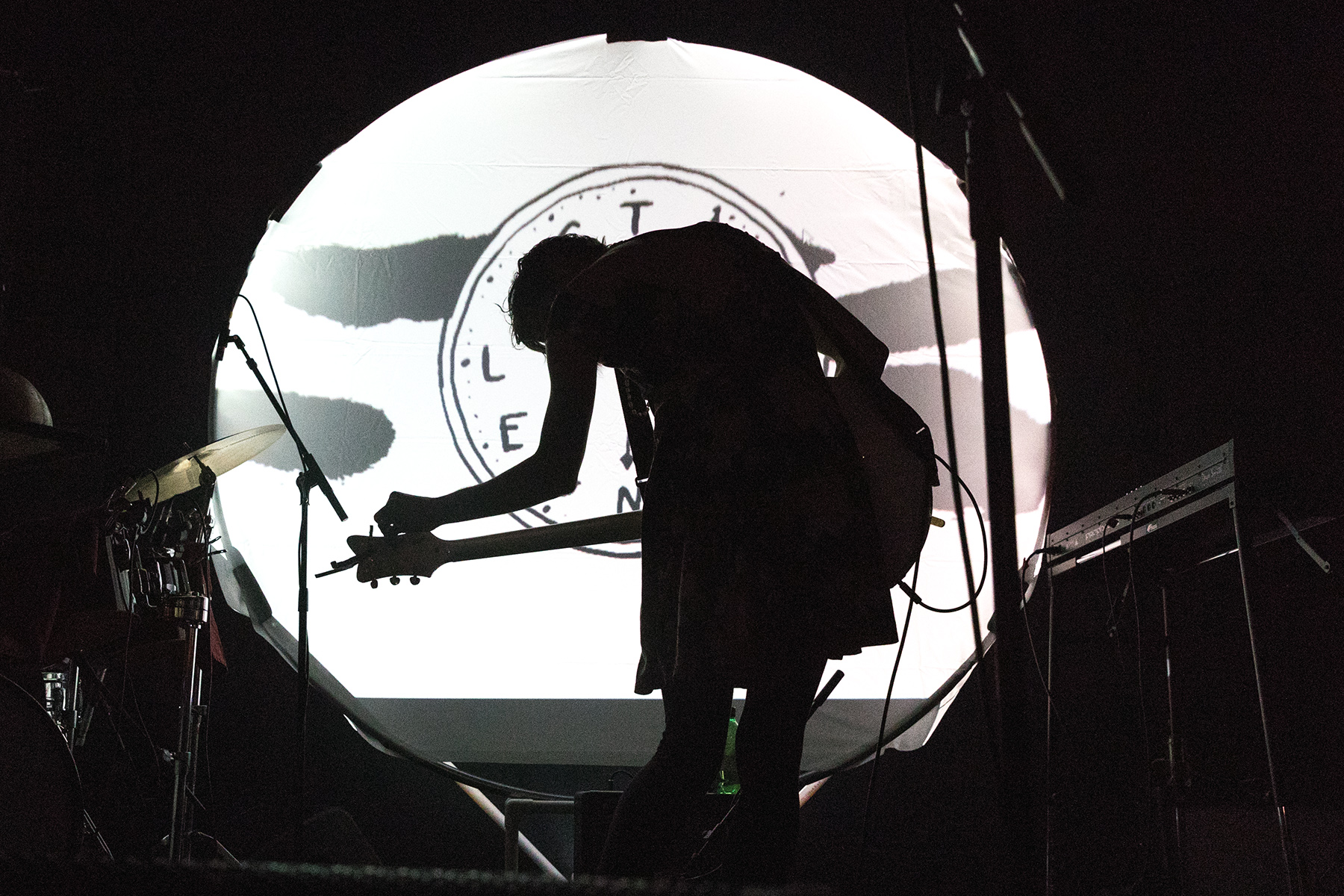 Ezra Furman and The Visions – A Transangelic Exodus through Liverpool

If you need to find a door inside of your head that leads to somewhere else, Ezra Furman will show it to you.  This particular door opens up to us in Liverpool.  The narrative-driven album Transangelic Exodus is passing through our outward facing city.  We’re lucky.  Protagonists like Ezra Furman don’t usually live off the page as lucidly as this.  The songstress is on the road and on the run in a red Camaro with his lover – a human being that has grown wings to become an angel.  The red neon lights and Georgian facades of Seel Street feel like a good spot for Ezra and his divine messenger to hole up and rock out with ‘wings of tinfoil and cigarettes found on the street’.  A full to capacity crowd gathers to invoke this sonic story for the first time before its release.  Ezra explains it is ‘Not a concept record, but almost a novel…a personal companion for a paranoid road trip’. 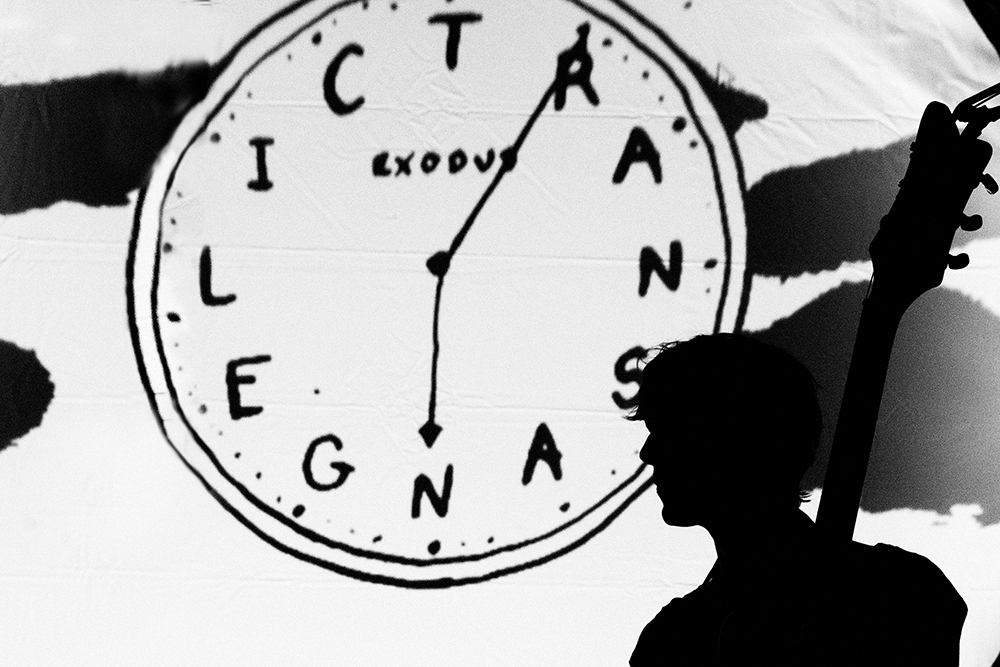 An animated clock ticks on the Art Club’s back wall to spell out T-R-A-N-S-A-N-G-E-L-I-C where the numbers of time should be.  The record tells the tale of a government that fears angelic transfiguration is contagious.  They want it outlawed.  If you grew a pair of wings that night beware of the authority’s intent to remove them in a semi-illegal procedure.  ‘Let the law pronounce its petty assertions, They’ve been outsmarted by a couple of urchins’.  The wait is over.  Ezra appears in a black floral dress with a white electric guitar in front of the clock face.  The angel of his story has escaped out of a hospital window bloodied, bruised and chemically burned.  Thanks to some incredible lyrical pins that light the way this road movie is about to be vividly projected into the mind’s eye of each ticket holder. 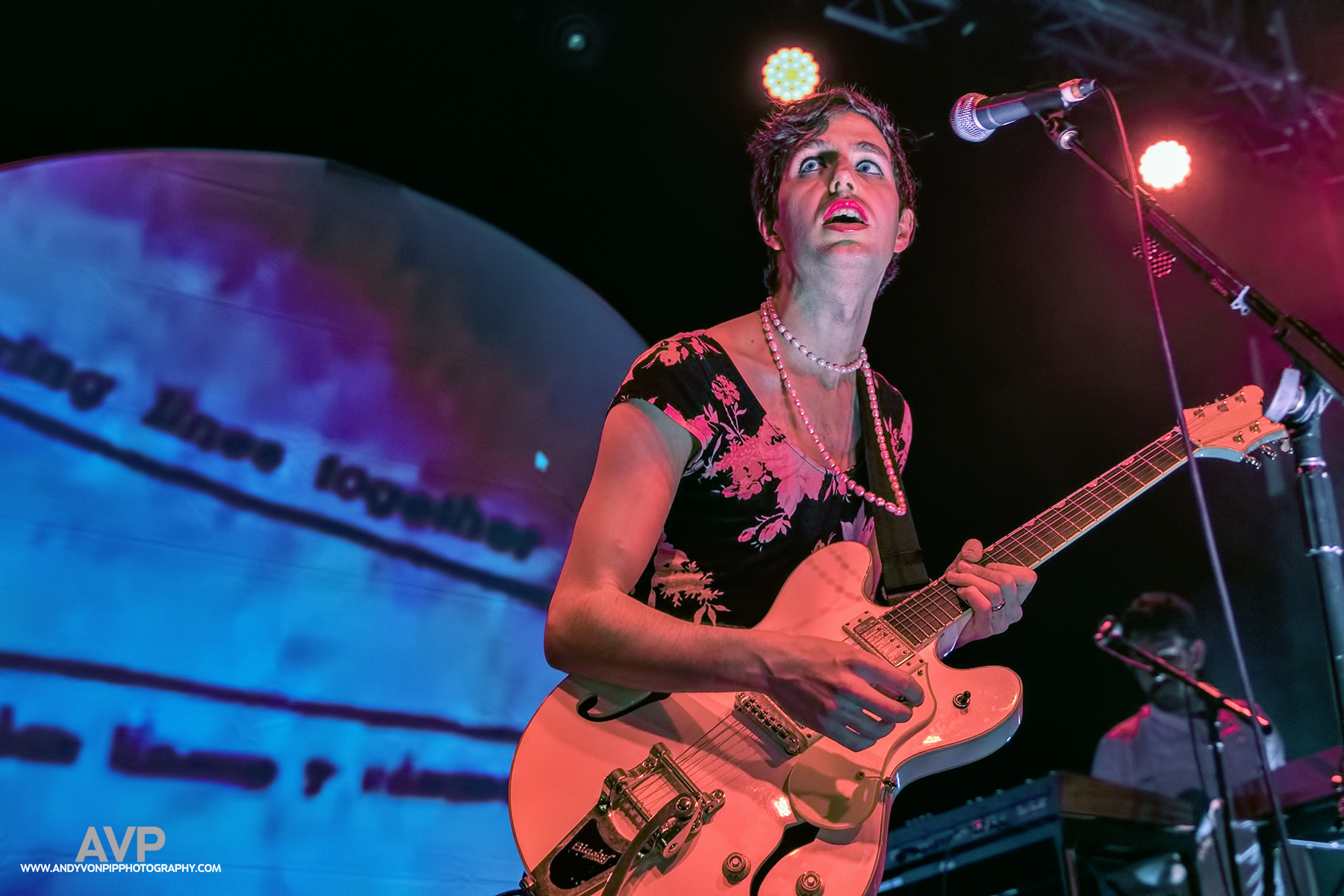 The reality we collide with is blue-eyed and staring, red-lipped and singing some of the best writing I’ve ever heard.  There was a point within the performance when I realised I was seeing something important.  He belongs to the alt-rock canon but we’re watching it unfold.  That’s rare.  It made me feel okay about never having seen Nirvana live. He’s a better writer than Kurt Cobain and on a personal note, Kurt Cobain was the reason I wanted to write in the first place.  To help you hear him I could reference the dropping chords of the Pixies, the instrumental majesty of The Polyphonic Spree, Jonathan Richman’s sense of humour, Bob Dylan’s poetry, and how Ezra’s deft narration of American living shares a sensibility with the lyrical contents of Belle and Sebastian’s bus rides.  For sure Kerouac is beckoning this Beat Angel with open arms.  The combination to Ezra’s semi-fictional door is on three chords and these reference points all sometimes echo within his room.  However, we’re hearing something new – the songstress walks alone within that lineage.  The future is breathing down the neck of the past.  Thank God for Ezra Furman.

One of the album highlights is Psalms 151.  It tells the story of a non-practising angel with a broken halo that goes unworn and hangs in the hallway at the end of the stairs.  It’s a slow and delicate song that twins well in that regard with another album track God Lifts up the Lowly.  Psalms 151 is like a love song in utero; at the point where love is present but holding back – not ready yet.  It reveals the angel as being selective of its witnesses: ‘she said I’ll feed you in the morning eggs on rye bread, But you’re sleeping on the floor don’t come to my bed, It’s too soon for you to see me with my wings spread’.  This sense of love in stasis is highly relatable but this frustration also belongs to the album’s tapestry of the self in struggle.

Compulsive Liar discusses years spent in ‘that old protective closet’ and the dynamic it created: ‘If I don’t love you I’ll tell you anyway, And even if I love you…I’ll always be negotiating with the truth’.   Likewise when buying a Maraschino Red Dress $8.99 at Goodwill Ezra relays being ‘At the register trying not to be seen looking over my shoulder’.  The rearview mirror is a key image that ties this ‘cluster of stories’ together.  It is the object with which we can travel forward, watch our backs and look into ourselves.  This extra vantage point supports forward motion and survival but it’s also interesting in the context of Furman’s incredible performance.  At the bridge of Tell Em All to Go to Hell (Day of the Dog) he sermons the following words to the steady clap of the crowd:

“These two impulses are one.  The rage of the ape ancestor inside of us, and the pure joy of the holy human being.  They come together, reach a crescendo and they are indistinguishable from each other.  Going up to that point.  Going up to that ‘scendo, man you get a good thing going”. 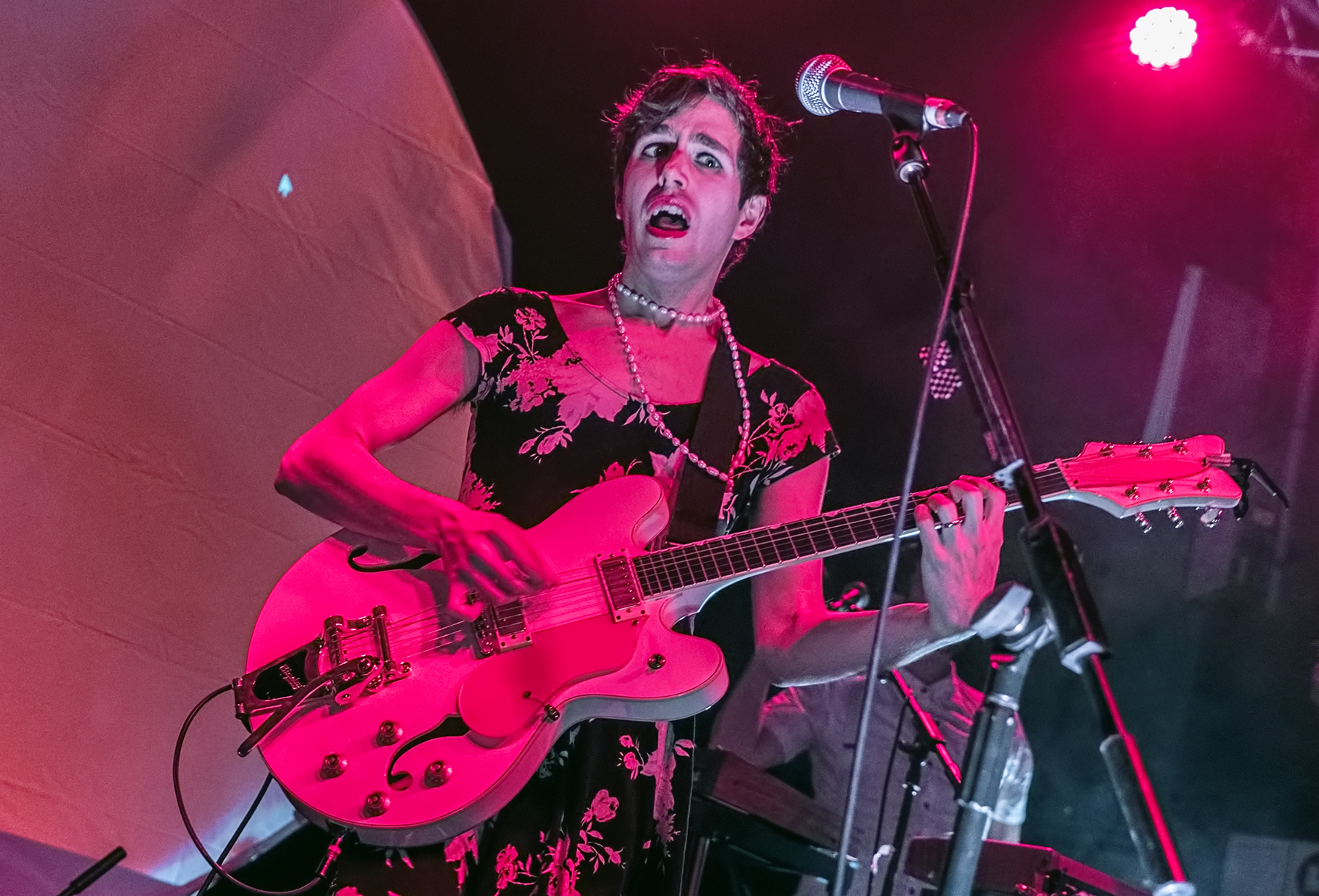 In the ‘queer outlaw saga’ of Transangelic Exodus the self is forced to find that same energy.  It is needed so it can fight for its very existence with assertion, and at the same time, the private loving self is forced to make that fight public and vulnerable.  It’s this strength that Ezra Furman has that makes him both exciting and important.  ‘I’m nervous’ he says in anticipation of singing Love You So Bad.  The jeopardy of him not playing it would make your heart stop.   It’s a song that becomes a repeated and addictive listen.  The refrain of the title is as gorgeously persistent as the people you privately think of as it plays.  Ezra Furman and The Visions ‘hope to function as an anti-despair machine’ and they do.  Liverpool demanded two encores and this included a red-lit cover of Kate Bush’s Hounds of Love.  The exodus continues on tour and it comes back through the North West in Manchester on May 27th.  ‘Fuck it, baby’.  Don’t miss it.  Climb out of the hospital window.  There are some angels that you want to meet.