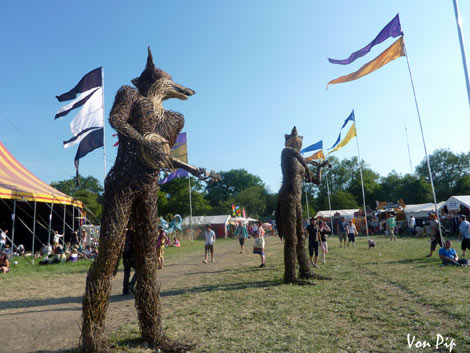 What is it that’s makes the Glastonbury music festival such a magical event? Why do sane people talk about it with the fervour of the zealot, practically shedding tears of joy as they try to explain how wonderful the place is?  Arriving at my first ever Glasto I set myself the task of trying to discover the source of  this wonderment, a  bit like John Locke in ‘Lost’ but with more hair.  As the shuttle bus taking us to the festival  slowly weaves its way through lush patchwork blankets of  greenery under the most perfect of blue skies,  I catch  my first glimpse of the festival site, rising majestically from a valley and looking very much like the set of a huge medieval jousting tournament, and even with that very first glance I feel an emotional response which I manfully keep in check.   Upon arriving at the actual site the first thing that hits me is the sheer size of the place, TV really does not prepare you for this!   As I walk through the entrance I spy an inebriated reveller dressed as a clown slumbering in a wheel barrow clutching a tin of cider. . .I definitely feel like I’ve arrived on a different planet and that normal rules don’t apply here, then again maybe I’ve arrived ‘home’ ;)

Chapel Club take the honours as first band I see at the festival on Thursday night, appearing at a packed and sweaty Queens Head stage. They produce a confident and accomplished performance which aptly demonstrates just why their swirling guitar sound allied to intelligent, literate lyrics will doubtless be gracing the bigger festival stages in a year or two.

The first day of the festival starts  with an appearance from antipodean octogenarian Rolf Harris, the old fellas obvious charm and warmth is quite intoxicating and even somebody as po-faced as me who is admittedly no fan of novelty pop and is firmly in the  “Didgeri-don’t “ camp, finds myself rather enjoying his performance.  Then it’s off to the Park stage to witness a lively and polished set  by American folk rocker Lissie, who’s debut album ‘Catching A Tiger’ has just been released and who could definitely be one of this year’s movers and shakers. Her songs conjure up Stevie Nicks without the scented candles and floaty nonsense and her cover of Ga-Ga’s ‘Bad Romance’ is a thing of wonder.

It’s not long before I am  re-living my punk past in the shape of a sterling set by The Stranglers, appearing, somewhat surprisingly, at  their first ever Glastonbury . It’s such a solid performance that I completely forget that  Hugh Cornwell  left the band many moons ago, such is the stellar performance of Baz Warne who never resorts to  impressions but  perfectly captures the misanthropic tone of the songs,(mind you he’s being doing it for some ten years now).

Lowlight of the day has to be catching a few numbers by the Courteeners, a band much fellated by the NME and who provide not so much landfill indie as festival effluence. Watching  these fellas flounder on stage is like watching a fish out of water, as it flops about aimlessly in an attempt to delay the inevitable. To add to the overall bad vibe there’s also a slightly nasty edge to the audience who think hurling full cans of lager indiscriminately into the crowd is a tremendous jape .  Despite the unforgiving sun I decide to leave these lantern jawed Neanderthals behind and make my way to the West Holts stage to catch the trip-hop majesty of Bonobo . I then point my feet in the direction of the Avalon stage to see the not quite legendary Woodentops play a set of their ‘nearly greatest hits’ and who perform with  the sort of energy  and vigour that puts many younger bands to shame   ….Time for a rest and a drink….

Suitably revived I amble ( for I am yet to mosey)  past  the Other Stage and catch 20 minutes of Florence’s set, which the rumour mill suggests draws the biggest crowd this stage has ever seen!!   The audience of course go ape shit upon Flo’s arrival and the frenzied atmosphere is obviously contagious as Ms Welch seems unable to restrain herself from unleashing lung bursting histrionics and her worrying predilection for Mariah style vocal ticks appears to be reaching the terminal stage.  She seems incapable of performing any song these days without bellowing at the top of her voice like some sort of ethereal female version of Brian Blessed.    Her version of “You’ve Got The Love” starts well enough, but alas the dramatics soon  kick in and I decide to head off to The Pyramid stage to see what tomfoolery Dizzee Rascal is getting up to.  His mash up of ‘Smells Like teen Spirit/’Stand Up Tall’ is full of primordial, savage brutal energy but I am forced to beat a hasty retreat as before long up pops the seemingly omnipresent Florence once more and she begins to belt out yet another version of “You’ve Got The Love”. Does she have a clone? Is she stalking me? I fear if I were to head back to my tent at this point Florence would doubtless pop her head through the flap and bellow “you got the love I need to see me through” .  Actually no I haven’t, so give it a rest love.  (Apparently during the festival she also performs this song yet again with The XX at some point. Candi Staton is not amused)

Nobody quite knows what to expect from Albarn’s super-group, but logic dictates that people aren’t anticipating a greatest hits set surely? Given that this is the show that went down so well at the Coechella festival, suggestions that Gorillaz aren’t a festival band would seem somewhat redundant.   As their performance gets under-way it soon becomes apparent that we are being treated to an amazing aural and visual extravaganza and one which surely represents what the Glastonbury festival of music and performing arts is all about- a fusion of art, music, animation and stunning visuals to produce something fresh, challenging, and eclectic which also contains an underlying political message about the destruction of our planet.

But hang about , apparently I’ve got it all wrong (if the media reaction the following day is anything to go by)   because  all Joe And Josephine Public are desirous of is a good old fashioned  sing-a-long-a greatest hits set from their festival headliner. . .(The man in the street has spoken, but y’know, I’m more inclined towards Sid Vicious’s view of him actually ). From my vantage point there are a few people standing about who start to grumble after just two songs and seem unwilling to give anything vaguely unfamiliar a fair hearing, and maybe with a generation used to downloading music via a simple mouse click, there is no appetite to be challenged musically with instant gratification being the name of the game. For some the slow burn, or concept album is dead replaced by personalised playlists, Kaiser Chiefs style nursery rhyme sing-a-longs and nostalgia fests. If that’s the case then Simon Cowell must be rubbing his hands together with glee.  This attitude is probably best summed up by two girls who without a trace of irony comment “I’m really disappointed he hasn’t  played “Parklife”..and “Who are these random old men who keep walking on”. But as for the media driven story that hundreds were streaming away I must say I saw very little evidence of that particular scenario and I can’t help but feel some reviewers had already written their headlines before  Gorillaz had played a note. In fact many reviews seemed to focused soley on the crowd reaction in terms of decibels instead of commenting on actual show. By that logic Robbie Williams may well have raised the metaphorical Glasto roof –but he’d still be shite!

In my opinion the  Gorillaz live set is a  wonderful musical and theatrical experience, full of songs that are multi-layered, emotive, moving, subtle and joyously lacking in the sort of  Dick Van Dyke blokeiness which so often used to irk me about Brit-pop-era Blur.  Little Dragon’s Yukimi Nagano’s amazing otherworldly vocals are enough to have my eyes welling up with tears and yet as the set concludes one young lady informs me she just didn’t think it ‘felt special enough’,!!  I can’t really let that one go and  respond ‘ you’ve just seen a band containing half of The Clash fronted by Lou Reed, Mark E Smith, Shaun Ryder , Bobby Womack, De La Soul, Kano, Bashy,  and  Snoop Dog. And that’s without mentioning the amazing tribute to Dennis Hopper  or the fact that you are in the middle of a beautiful valley in Somerset on  a stonkingly hot summers night ! You’ve hit the musical jackpot love!”. Sadly it appears that at least some of the audience tonight isn’t really up for it and Pyramid Stage regular’s want hits not challenges or a broadening of musical horizons. The set certainly increases my admiration for Albarn tenfold, hats off to him for providing Glastonbury with something unique, mystical and extraordinary. A festival highlight!

The night ends with a trip to Shangrila, an amazing assault on the senses but alas far too busy for my gnarled old carcass to handle.  I am soon secreted under canvas once more for a quick nap before the sun does its early morning rounds, driving us from our tents at around 7.00am like hordes of hung-over vampires desperately seeking shade!