‘Breaking Hearts And Giving Up‘ By Pris.

Are you fed up with earnest young men sporting de rigueur beards, singing about the burden of being rich and misunderstood? Maybe you’re sick to the back teeth of the seemingly infinite procession of quirky Brit schooled, incense burning, floaty robed, ‘mystical’ ladies who sing about the square root of fuck all? Or quite possibly you have had your fill of homoerotic, metro-sexual boy bands and vapid overproduced, auto tuned girl bands? Does it feel like punk never happened, that the D.I.Y, don’t give a fuck ethic has all but disappeared as the musical landscape has been taken over by trainee accountants on a gap year who produce the aural equivalent of magnolia paint? Where’s the colour, where’s the attitude, where the fuck are the characters?

Well say hello to your new favourite snot pop,post punk pop princesses, Pris. Tottering about on heels as high as their hem lines and displaying more attitude than the combined pupil populace who attend gargantuan tongued, culinary philanthropist Jamie Oliver’s Dream School, Pris are about to kick some life back into planet pop, or at least have some fun trying. With their stilettos’ sharpened and readied to burst a few fragile egos, they may not be the sort of girls your average designer nu-folker’s aristocratic family would approve of, but we at the VPME love them ( there is a male drummer by the way, but he’s hidden away rather like Bertha Rochester in Jane Eyre. Well they do say all drummers are mad 🙂 ) Pris don’t suffer fools, shoot from the hip and waste no time explaining exactly what is wrong with the current pop scene. In doing so they also cleverly manage to make one of their heroes,The Manic Street Preachers’ Nicky Wire, sound positively diplomatic.

They’ve described Jessie J as ‘looking like a mental messed up Mystic Meg’ and suggested that ‘Do it like an astrologer’ would be a far more apt song title. (Gossip Girl) Taylor Momsen is apparently ‘the most un-rock n’ roll girl you’ve ever seen- an embarrassing c_t’, and latest indie hopefuls, the execrable Brother are quite rightly dismissed as ‘dire- is it even possible to be a crappier version of The Fratellis? They also have no time for the fey, pretentious wankery of Everything Everthing –‘Jesus Christ, we’ll actually kill ourselves if we have to listen to Everything Everything ever again.’ Whilst the feelings induced by the gurning unbearably smug visage of X factor chump, Olly Murs, is nicely summed up as ‘having such a punchable face- the dick.’ Oh yes this is indeed our type of band!!

However unlike me, there’s much more to Pris than nice legs and hilarious quotes, because crucially Pris possess killer pop tunes to match the attitude. ‘True Romance’ for example is a superb slice of post punk pop, reminiscent of Blondie , The Go-Go’s and Transvision Vamp at their best. ‘ Blue Tack Baby’ is bubble gum pop at it’s most disposable and indeed fun. ‘Crying After Kennedy’ shows that Pris are capable of writing songs that aren’t just about lipstick and lashes, whilst the marvelous driving grunge pop ‘Breaking Hearts And Giving Up’ sounds at various points like The Long Blondes, Elastica and Kenicke. The deliciously titled ‘All That Glitters is Not Pearl Lowe’ once again demonstrates that Pris care not for egos or celebrity confessionals and any band that can mock the Klaxons mid song surely is deserving of your ears? True, Pris may not be about to produce a concept album based on Arthurian legend replete with a centre piece mandolin solo, but if it’s short, sharp uplifting pop with attitude you want, Pris are here to use you and abuse you. You should be fucking grateful! 🙂

We spoke to singer Cat, and after calming her with offers a rare 90’s vinyl she agreed to answer some questions, we found her to be very much a CAPS LOCK kinda gal.

CAT : PRIS ARE A 4 PIECE GUTTER POP HORMONAL POST PUNK BAND. IT’S A MOUTHFUL BUT WE LIKE MOUTHFULS. WE MET THROUGH MUTUAL FRIENDS, HAD A FEW BENDERS TOGETHER, SANG A FEW COVERS TO EACH OTHER, EMAILED RANTS ABOUT THE POPSCENE WORLD AND HEY PRESTO.

VP: So you’re named after a replicant sex worker ?[From Bladerunner] Why ? Will there come a point in your career when a possible stage entrance may feature Pris style cartwheels replete with Rutger Hauer look alike backing dancers?

CAT: WE WOULD LOVE DANCERS LIKE THAT FOR PRIS. MAYBE WHEN WE HEADLINE THE O2 ON 5 DATES IN THE NEAR FUTURE. BLADERUNNER IS ONE OF OUR FAVOURITE FILMS. WE LIKE PEOPLE WHO LOOK AND ACT IMMORAL, DESPICABLE, TRASHY AND CHEAP, THOUGH THIS DOESN’T INCLUDE BERLUSCONI OR GALLIANO.

VP : You recently opened at a Manic Street Preachers show, for a relatively new band that’s some achievement! Was it a fairly nerve wracking experience? Did you get to meet and hang out with them after the gig.

CAT: WE WERE SCARED OF FALLING OVER DUE TO THE HEIGHT OF OUR HEELS AND THE SHORTNESS OF OUR DRESSES. WE ALL HUNG OUT INTO THE EARLY HOURS TAKING LARGE AMOUNTS OF COCAINE AND DRINKING TIGER BLOOD. OBVIOUSLY THAT IS A COMPLETE LIE.

VP : Cat, I’ve been told you’re a massive Manics fan and have a shrine to Nicky Wire made from real hair, toenail clippings and biscuit crumbs in your bedroom. Did you find it a bit disappointing for a band who sang ‘We Destroy Rock n Roll’ on ‘Motown Junk’ to appear on Strictly Come Dancing with a chinny octogenarian and that chirpy Vernon Daley lass?

CAT: THAT SHRINE WAS 10 YEARS AGO FOR CRYING OUR LOUD! THERE ARE NO IMPORTANT MUSIC SHOWS ON TELEVISIONS ANYMORE. ALL WE HAVE IS T4 ON SUNDAY MORNINGS AND JOOLS HOLLAND. AS GREAT AS THESE SHOWS ARE THEY WILL NEVER BE AS IMPORTANT AS TOP OF THE POPS FOR US. WE LOVED TOP OF THE POPS SO MUCH THAT A PRIS VS BBC MASSACRE WAS CONTIMPLATED WHEN IT CLOSED. I WOULD OF SETTLED FOR CD:UK WITH THOSE NICE GEORDIE SHORTIES BUT THEN THAT BUGGERED OFF TOO. SO FOR PRIME TIME MUSICAL FLAUNTING I THINK DOING STRICTLY WAS AN ASTUTE CHOICE.


VP : Damn you with your well thought out answers ! Ok so what have you got planned, band wise in the coming year ? You of course realise ‘True Romance’ has to be a single at some point?

CAT: WE’RE GOING INTO THE STUDIO IN THE NEXT WEEK OR SO TO RECORD OUR DEBUT SINGLE. WE STILL HAVEN’T DECIDED WHAT SONG BECAUSE WE HAVE TOO MANY GOOD ONES-WE’RE SURE MUMFORD AND SONS DIDN’T HAVE THIS PROBLEM.

VP : So what do you reckon about the current state of the music scene ? Too much earnest nu-folk, too many shite manufactured pop stars? What would you change if you had the power? The beheading of Simon Cowell, BBC radio announcing a ban on Brit school kids ?

CAT: THE MUSIC SCENE IS A STATE , A COMPLETE MESS, FULL OF FLITHY RICH FUCKERS ON FIDDLES, UNSIGHTLY POPSTARS WITH GUITARS, UNDERWEAR SHOWING EMOS WITH ASYMMETRIC HAIRSTYLES, AND SIMON COWELL IS NOT TO BLAME FOR ANY OF THIS. WHERE HAVE ALL THE GOOD ONES GONE? IT NEEDS A PRIS MAKEOVER PRONTO.

VP: Who would you say are the most iconic musicians’ past/present, ones who broke the mould and did something a little different. Gary Barlow is obviously a given.

CAT: COURTNEY LOVE FOR HER BABYDOLL DRESSES AND HER GORGEOUS SCREEHCING AND INSANELY GOOD LYRICS. IAN CURTIS FOR BEING YOUNG, NORTHERN, BEAUTIFUL AND HEARTBREAKING

VP: And as a tribute to your song ‘Blue-Tack Baby, who did you first have a teen crush on….

CAT: MUSIC AND COOLEST WISE PAUL SIMONON THE CLASH BASSIST. MY GOD, I STILL DO, I THINK (AND STILL WOULD) NON MUSIC WISE SHAWN MICHAELS FROM WWF WRESTLING. DOH.

VP: I think everybody should follow you on twitter for your chuckle inducing tweets’ So who’s been pissing you off this week?

CAT: LILY ALLEN AND HER BULIMIA, WHO CARES? EVERY ONE FUCKING WOMEN/GIRL/TEENAGER I KNOW HAS HAD AN EATING DISORDER, YET SHE ADMITS IT ON NATIONAL TELEVISION, THAT IN ITSELF FUCKS ME OFF.

VP: As mentioned you’ve already opened for the Manics, what would top that ? What would be the ultimate musical zenith for Pris.

CAT: A CLOTHING RANGE AND CHRISTIAN BALE AS OUR NUMBER ONE GROUPIE

VP: Five things you plan to do this week ? 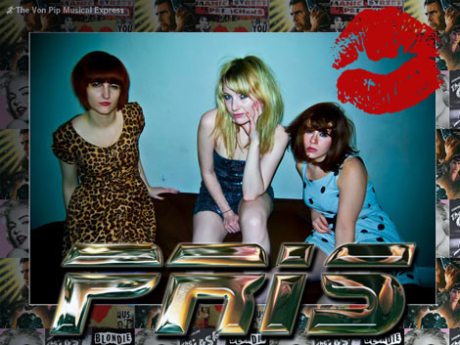