Words and photos by Catshoe

Sarah Blasko is huge in Australia, which made it a bit of a reality check stepping from the street into a packed house at Islington’s 800 standing capacity Academy. In fairness there were clues, what with the obligatory touts outside. Inside, well mannered 20 and 30 somethings, checking their Blackberries and iPhones. Well mannered, but desperately keen to press to the front, I’ve had more personal space at punk gigs.

Original support band The Tiny had to cancel at the last minute. That’s a real pity as I fancied seeing their purported Swedish strange-ness, but Icelandic volcanoes put paid to that. Instead, the audience gave a generous reception to Whitley, consisting of one man and guitar.

I could hear the accent twang all around me, and chatting to people in the crammed space up near the barrier, friendly people, they jokingly surmised that 80% of the crowd tonight was antipodean, likely from Melbourne and Sydney.I’ve never seen Blasko live before. Even on the opening number, tinkly piano’d “Down on Love”, what immediately struck me was just what a forceful presence this woman is on stage. I’ve really enjoyed the new album As Day Follows Night, but unless you play it loud, you miss the full effect of her voice, especially with that lush Björn Yttling production. With the band tonight consisting of two violins, double bass, drums, keyboards and the odd bit of acoustic guitar, there was a marked difference from the slightly popsicle inflections that come through just a teensy bit on parts of the album. Not that it’s a good or bad thing, just different. 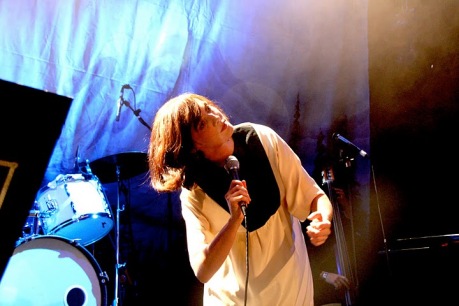 Tonight in the nicest most pleasant way, she demanded and commanded with that voice. A remarkable thing it is, a huge gift if that’s how you see life. Even if I wanted, I can’t make any easy comparison to another artist. Girl-ish and lilting but pushing it out there powerfully, and with a huskiness you could only get by mixing corn flour and icing sugar. A couple of numbers in, and leading into anthemic and empowering We Won’t Run, Sarah dedicated the song to ‘anyone who’s not feeling so good, anyone going through any sort of difficulty’. This was a touching moment but was marked by having to lace the dedication with a suggestion that ‘keeping the talking down a bit would be good’.

On Sleeper Awake, possibly my favourite Sarah song, the backing band pushed their own up to 10, with the addition of a second keyboard, but still Sarah’s voice flew up there riding over the mix.In contrast Is My Baby Yours was just her and one of the band’s two Daves on piano. Having listened to this a few times on CD, here it finally made emotional sense with that melancholy rejoinder of “should have known he still loved another”. As it faded, there were ‘Woohoos’ coming from the audience, which delighted Sarah – a particularly Aussie thing and therefore making her feel more at home than mere applause. Here’s a bit of a litmus indicator of the night. You know those nice but tough security chaps given to hanging round stage front in yellow vests and earplugs? It was a glorious moment to see the slightly jaunty intro to I Never Knew get the biggest and toughest of these dancing at the side of the stage. Until his no. 2 reminded him that he wasn’t there to dance, but even so… I was impressed. A couple of songs, All I Want amongst them, demonstrate a particular additional gift that Ms Blasko has, that being to yodel and give us an almost Roy Orbison moment. It was disconcerting for a second I have to admit, but hey, she seems comfortable with it and the crowd loved it. A couple more songs and the rest of the band trooped off leaving just Sarah and ‘Dave the piano’ for what she said was going to be the cabaret section. “Just imagine you’re in a cabaret club”. By now I was standing a bit further back, not far from the bar, trying to achieve my new year’s resolution not to spend every moment of every gig on the front row. The clientele was just as jam packed and enthusiastic but possibly more lubricated, and this request from Sarah caused some confusion. Melbourne / London accents giving it “..but we are in a club” “A cabaret club” “Oh I see..I think…” Sarah told us she was going to do Seems Like Old Times from the film Annie Hall. “Oh my god, that’s my favourite film EVER” trilled the girls alongside me. The next song in the cabaret was Xanadu, from the film. ‘Love the song, don’t like the film’ said Sarah, and despite it being a nicely stripped back version, it inevitably produced the sort of dancing usually seen at wedding receptions. Just thank the lord it was a cover and there was no sign of the original ‘artistes’. 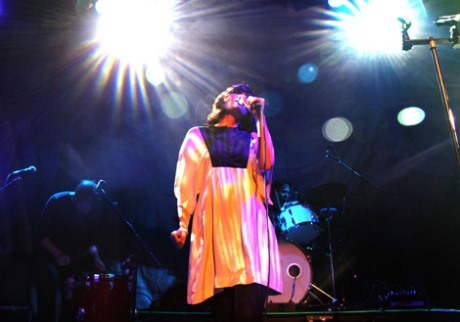 We were told that this count instead of an interval, and there would be more songs but not an encore. Hey, I can really respect such honesty of approach. I have to be honest, this was not the strongest part of the set, variety act rather than revelation via re-interpretation, but as an alternative to standing clapping and stamping and waiting, it got my vote. We then ran into three older songs to finish the set, Sarah feeling the need to apologise that everything up to the cabaret interval had been off the new album. No need to apologise to me, but I can see the need for a few older crowd pleasers. Finishing with Always Worth It, the band eventually trooped off at 10.30 having been on stage for an hour and half and true to promise, the house lights came straight up. Despite this fairly long set, there wasn’t any sense of flagging, on the contrary it just built all night. My enduring impressions and emotions were of Sarah’s voice, her all encompassing presence on stage, and, I have to say, the sheer quality of the songs.

By the time you read this, Sarah will be off for a few European dates before coming back to the UK to support the Temper Trap. If you’ve got tickets, do yourself a favour and get there early enough to see Ms Blasko. I don’t think you’ll be disappointed.

Bird on a Wire

Hold On My Heart

Is My Baby Yours