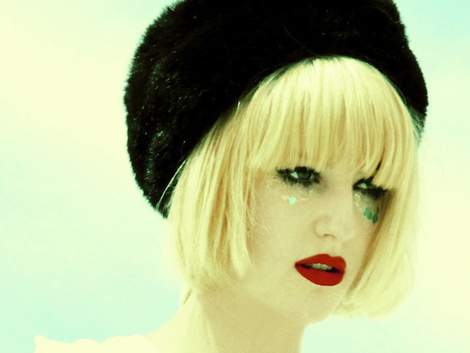 Featuring  Beth Jeans Houghton, Beau And The Arrows, Wye Oak and The Finger.

Beth Jeans Houghton returns  and releases the track ‘Dodecahedron’ as free download to whet your appetite for her forthcoming debut album, set to land in August.  After  earning rave reviews for her  ‘Hot Toast Ep’  , single “Golden/NightSwimmer”  and her live performances she all but disappeared, due to ‘unforeseen circumstances’.  So what exactly is the new song all about ?  “The night before I wrote it I had a dream that consisted of me running up to strangers in the street and asking them what a dodecahedron was, but no one knew,” says Beth. “I later found out that the ancient Greeks believed the Dodecahedron is a symbol of the universe and represents an idealized form of divine thought. Take from that what you will.”

BEAU AND THE ARROWS.

Beau and The Arrows started as a music project by Singer/Songwriter Beau Carter. He was joined by his collabortaor in chief singer Jasmine Ketibuah-Foley, and the band has since expanded to include  Guitarist Layla Dudley and Drummer Jaimin Allen. Their debut album “Future Kicks” is preceeded by their third single “ Levy.” In an age where there seems to be a deluge of stage school wankery and jazz handed wannabes are everywhere it’s nice to hear from a band who seem to posses a bit of attitude and erm, spunk.

“Levy” By Beau And The Arrows.

Wye Oaks album  ‘Civilian’  looks set to be one of the albums of 2011, and their  latest single ‘Holy Holy’ is being made available for FREE.  They are also supporting The National as well as embarking on their own European headline tour .

If you read the headline “Greece Give Europe The Finger” you may be forgiven for thinking this may relate to the financial crisis currently spreading across the Euro Zone. But you’d be wrong, The Finger are in fact a band from Thessaloniki who deliver punchy, melodic indie rock and prove there’s far more going on in Greece than George Michael wanna-be’s and Demis Roussos impersonators. The band are currently working on their debut album, in the meantime you can grab a rather marvellous song for free below. ( Imagine how big it would be if they changed the title to ‘Die , Die News International?‘) Greece is the word…

1 thought on “Songs To Learn and Sing – Beth Jeans Houghton, Beau And The Arrows, Wye Oak and The Finger.”