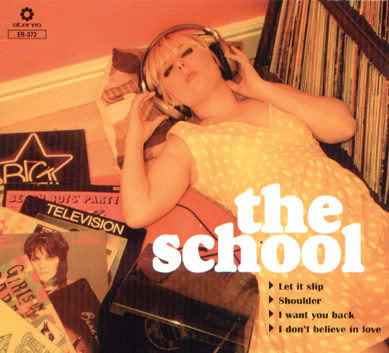 “I Want You Back” By The School

This could have been the shortest review in history, for in order to sum up the delights contained within this elegantly packaged CD, courtesy of the fabulous Elefant Records, I need only say this “The School’s second single, the “Let It Slide” EP, contains the results of one of those magical occasions in which a band and their producer effortlessly attain pure pop perfection, buy it, make them famous and then bask in the warm glow this band induce.” That really should be that, review over, now off you go here ,and purchase the CD ….Bye Bye, mind how you go. …. But we live in a cynical age, so my job it would seem, is to convince you that in procuring this EP, it will add joy to your life. The problem, as I’m sure you know, is that writing about music is like dancing to architecture.

The School are from Cardiff and feature Liz Hunt formerly of The Loves on vocals, they create the sort of life enhancing bittersweet pop music that Motown and Phil Spector produced in their respective heydays, but it’s also a sound that gives a fair old nod in the direction of the likes of St. Etienne, Camera Obscura, and Lucky Soul.  It’s the sort of music that anybody who has a fondness for the Ronettes or the Supremes and enjoys a modern take on this genre will listen to and declare with gusto “Well, they’ve certainly raised the bench mark there”.  Its pure pop, with its roots in C86, but with a sophistication and shimmering brilliance that I’d hoped maybe a band like The Pipettes would one day be able to produce. The School prove that making great pop music doesn’t mean things have to be reduced to the lowest common denominator; people don’t just want “simple.”

“Let It Slide,” and “Shoulder” are wonderful slices of pop which invoke visions of a young Kirsty McColl in her “They Don’t Know( About Us”) period, joining The Supremes in the studio for a song or two (although admittedly, the logistics of this ever happening now, could be problematic.) They also led me to indulge in an unprecedented “shimmy” on at least more than one occasion . The School are obviously a band who love and respect their musical history, enjoy what they do, and do it bloody brilliantly,they can also pick a producer too! In football it’s often said, if you don’t notice the referee, he’s had a good game and the same maxim can surely be applied to music producers. Thankfully they don’t all feel the need to wear a “I’m Mark Ronson ,Who the Hell Are You?” T-shirt ” whilst contriving to cram in as many whistles, bells and “trademark” “honking horns” as possible, in order to assuage their raging ADD. In fact Ian Catt’s superb, elegantly understated production makes you realise what a complete balls up somebody like the aforementioned clown prince, Ronson would make of the brilliant “I Want You Back.”

Underling (with bizarre unspecified accent): Ah but Mr Ronson sir, do ye not think there be enough horns thar? “

Yup, there are times I often consider that having Mark Ronson produce your work might make about as much sense as having Josef Fritzel as a birthing partner …..but I digress.. “ I Don’t Believe In Love” the closing track, is a sweet melancholic boy /girl duet and provides a fitting finale to the perfect EP. So yes, as previously stated, this record will undoubtedly add joy to your life, if it doesn’t, then start praying cos you’re already dead.

“Let It Slip” By The School

0 thoughts on “The School “Let It Slide” EP Review”