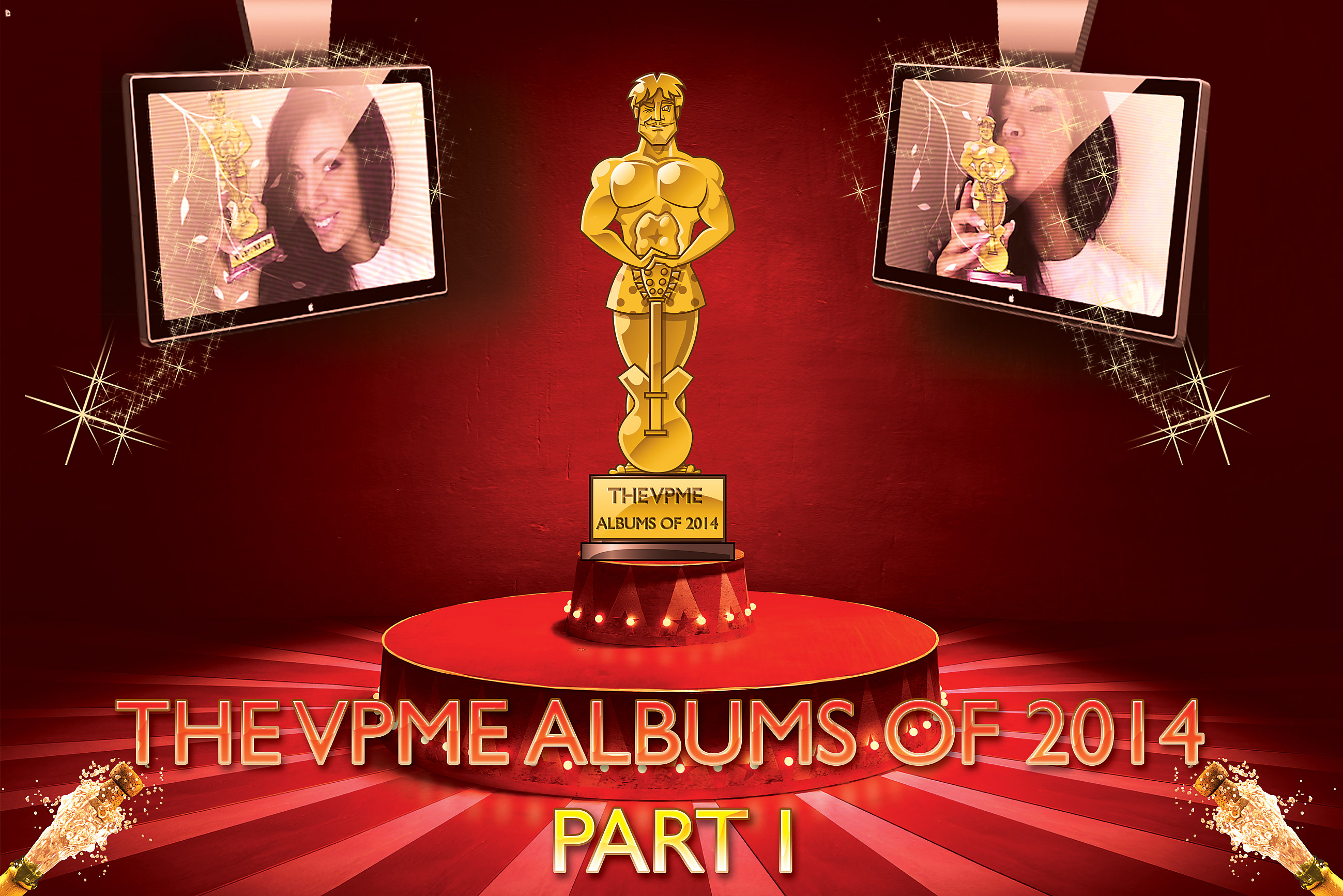 This year we’ve had to dispense with producing physical versions of our magnificent “Pipster Award Trophy” (as modelled by last years recipient Ladytron’s Helen Marnie HERE), and you can thank austerity for that…However it’s time for our favourite albums of the year. These are the albums we’ve enjoyed above all others during 2014, which was been an extremely strong year for the long playing format and debut albums in particular. It’s neither an attempt to show how outrageously  ‘edgy’ we are , or how pop we are (which is the new avant garde for cool middle class kids right ?) just an honest reflection on of our favourites.

Obviously we haven’t heard every album released, because we aren’t MAD and despite the stereotype of music bloggers we do actually have other interests outside of music, such as… erm..erm (leave that one with us). You may well be of the opinion that there are glaring omissions in our list, but that of course is all part of the love hate relationship we have with these end of year lists. For example we could answer outraged comments such as ‘a list without Saint Vincent is flawed and therefore invalid!’ perhaps so, but despite the fact we could admire the technical artistry and intelligent song writing alas we just didn’t connect with that album at all. And we aren’t about to pretend we adored it to garner empty hipster kudos. Taste eh ? it’s a funny old thing , ditto the dazzlingly derivative War On Drugs, who to our ears sound like a very proficient,  solid but interminably dull Bruce Hornsby And The Range tribute band.

Beach Day‘s wonderful second album ‘Native Echoes’ which sees Kimmy Drake (guitars/vocals,) and Skyler Black (drums) expand on the 60’s garage soul sound of their 2012 debut ‘Trip Trap Attack’.  ‘Native Echoes’  was produced by Detroit garage-rock pioneer Jim Diamond (no not THAT Jim Diamond UK people) and Beach Day prove once more they most certainly are not simply jejune revivalists hitching a ride on the burgeoning garage bandwagon.  There is more grit and grunge on ‘Native Echoes’ as the band flirt with feedback but keep their signature sound intact.  Furthermore front woman Kimmy Drake firmly establishes herself as a hugely talented singer and songwriter possessing an incredible voice that crackles with warmth and authenticity, reaching back through the midst’s of time to touch fingers with the girl group greats.

We won’t dwell on the fact that Teleman were formed from the ashes of VPME faves Pete And The Pirates other than to say that the idiom “The past is a foreign country: they do things differently there” may not quite apply to Teleman as you can still discern the trace elements of their former band throughout their excellent debut album ‘Breakfast.’  It’s packed with intelligent wistful, timeless evocative tunes and front man Tom Sanders’ vocal delivery lends proceedings a slightly haunting timeless quality. With a slight change of arrangement and key it could have been written in almost any era.

Ex Hex is Mary Timony of Helium and Wild Flag’s new musical project alongside Fire Tapes bassist Betsy Wright, and The Aquarium drummer Laura Harris.  The band who take their name from Mary’s 2005 solo album  and Rips is jam packed with a fizzing mix of melodic blues tinged rock n’ roll fused with a defiant punked up riot grrrl snarl.  Spunky and  punky and essentially never forgets that the best songs are still the ones that actually have a tune.

Lola Colt’s sweeping, imperious debut album was all we’d hoped for and more. A compelling dark cinematic tour-de-force . Its an album of light and shade, full of drama without ever sounding grandiose. Lola Colt are one of the best live bands around and this album adroitly captures them at their best, chiming guitars illuminate the dark landscape like he aural equivalent of forked lightning, whilst singer Gun channels the spirit of Patti, Grace Slick and Siouxsie to great effect, whilst managing to sing in her own unique style.

Flowers debut album was produced by Bernard Butler who subtly finessed  Flowers sound eschewing the “wall of sound” of their early demos for something more refined giving each song the space to live and breathe.  It’s an album of beauty, insight, maturity and depth.  Flowers make brevity a virtue with fourteen songs that rarely stray over the three-minute mark and yet adroitly manage to explicate the joy, the passion, the emotional anguish and heartache of being young.

Bird’s debut album was also their last under the Bird moniker and it certainly fulfilled their vast potential. It’s an album in which poetic lyrics are full of ominous portents and caliginous imagery which tell of dark lakes, of being tangled in seaweed, of coins placed on eyelids – this is literate Bronte-esque tinged Gothica in terms of style and content but certainly not ‘Goth’ by way of the fancy dress shop. Bird may well dwell in the shadows, and embrace the gift of darkness but perhaps ‘My Fear And Me’ is best summed up by this unattributed quote ‘I have found so much beauty in the dark, as I have found many horrors in the light.’ A hugely impressive haunting and compelling debut.

It’s an album of light and shade, of fire and water; it’s the Shangri Las writing songs by candlelight assisted by a Ouija board whilst a serial killer rampages on the loose outside.

‘Hold Still Life’ is a heart burstingly beautiful album with a real pop sensibility, one which is loud but always melodic and accessible. Tracks such as ‘A Place To Return To In A Dream’ and ‘Everyone But You’ meld MBV style dissonance with sparkling melodies whilst the sunny jangle pop of ‘Netsuke’ the majestic ‘Bright Lights’ and the bruised beauty and power of album closer ‘Water In The Valley ‘ demonstrate the bands ability to forge perfectly realised dreampop nuggets. Crucially Field Mouse never employ volume or effects as a device to disguise weak songs, because quite simply every song here is a winner.

Heartstrings’ is as good as anything that’s gone before (and yes, we include their amazing debut.) Admittedly, there are some who may see this as “a return,” but for us Howling Bells never went away. We’re just grateful that after ten years together, the mechanisms of the music industry and fickleness of the critics hasn’t eroded their enthusiasm – ‘Heartstrings’ is proof positive that Howling Bells remain as passionate and driven to make music together as they’ve ever been. And given the ‘churn rate’ whereby bands are lauded as the best thing since sliced bread before quickly being written off as ‘toast’ by all strands of the media, this is a huge achievement in itself. Long may they continue to chime

It would be a bit odd for us to review this album, given we’ve been friends with HMHB’s singer and songwriter since childhood. So we won’t, we will say that any album which contains a refrain such as ‘Midge Ure Looks like a milk thief ‘ is always gonna be worthy of your time. One thing is for sure, the older the Biscuits get, the more sense they make.. is it their best album? Well we aren’t sure about that, but if you merged it with their most recent albums ‘Achtung Bono’ ‘CSI Ambleside’  and ’90 Bisodol (Crimond)‘ you’d probably have the best album in the world ever (apart from ‘Psychocandy’ obviously ;)  )