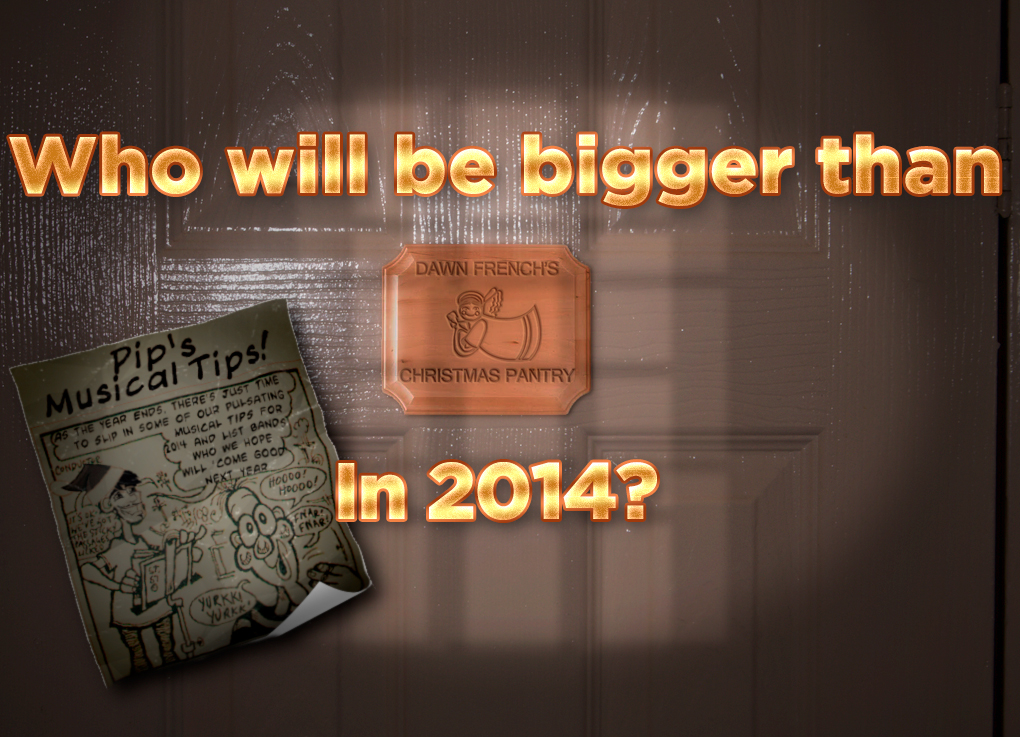 Ok so the BBC Sound Of 2014 has been  published, we’ll say no more other than note that those claiming that any band are “the last hope for rock music, ” need to have a fucking serious word with themselves. This sort of hysterical hyperbole is not only fatuous in the extreme it is also self-defeating and does nothing for the band other than piss people off.

Ok so who do we like ? Well last years “tip list” covered a mammoth 30 new acts, which in retrospect was way too many to take in or indeed for us to monitor. Amongst last year’s tips we included Wolf Alice, Embers and Coves three bands who we are sure will do well in 2014 and maintain the momentum they have  steadily been gathering in 2013.  Obviously we wont be including them again this year having already tipped them – because it’s the LAW.

This year we’ve stripped down our list to a more manageable dozen, and we’ll be playing Kathy Bates to their James Caan by following them all vigilantly throughout 2014. We generally try to stick with artists who have yet to release a début album and  really we only call this a “tips” list because “Pips tips” rolls off the tongue in fashion that delights our inner child and sounds far better than “The Von Pip Musical Express list’s some bands they really like and hope they do really rather well in the next year” … 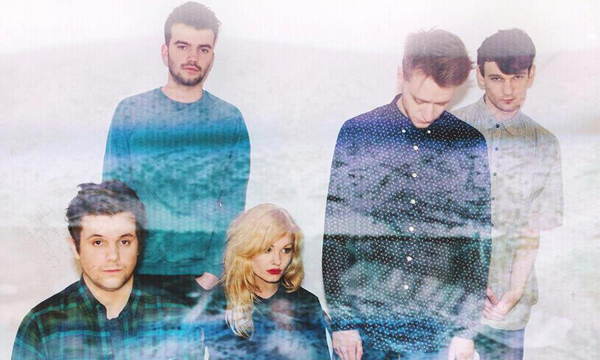 F**k me sideways with Thor’s mighty hammer we really do love Blessa. We’ve already waxed lyrical about this Sheffield five piece, but they undoubtedly posses all the attributes required to make a HUGE, nay Brobdingnagian impact in 2014. We’ve previously stated that “.. Whilst our politicians relentlessly pursue a pernicious ideological programme intent on bleeding all the colour and joy from our daily lives to create a bleak, myopic, nasty paranoid monochrome version of Britain, Blessa have appeared like a vivid incandescent rainbow.”  Being able to emotionally engage with people via music is a rare gift, and one that should be cherished rather than reducing a person’s value to what they contribute to the GDP. Bollocks to that, listen to Blessa and let them give your heart wings. 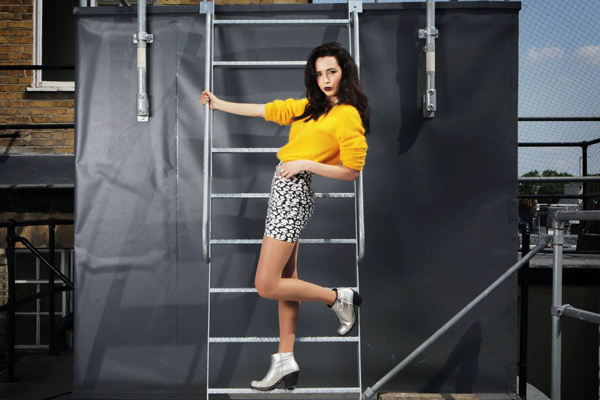 What more can we say about Natalie Findlay and her fantastic band? Every time we see them live they just get better and better. They blew all the other bands into a cocked hat at Liverpool Soundcity this year with a breathtaking performance (actually what is a cocked hat ?  A cock in a hat would David Cameron sporting a trilby no doubt? ) What strikes you when you see Natalie live is how on earth does her slight frame house such a HUGE voice. She’s supported the likes of Jake Bugg and The Courteeners this year, she’s also just released her second EP ‘Greasy Love’ ( be sure to check out ‘Fake Black Heart’) and hopefully 2014 will gift us,  if not a début album than at the very least more thrilling live performances and singles.

We note the NME weren’t too keen on her latest EP, which by definition means it’s very good indeed, because let’s face it the NME appears to be a refuge for  cloth-eared fuck funnels. If you DO catch her live there’s nothing quite like the moment when she finishes the jawdroppingly ace  ‘Sweetheart’ before launching into the head-rush of ‘My Sister.’ 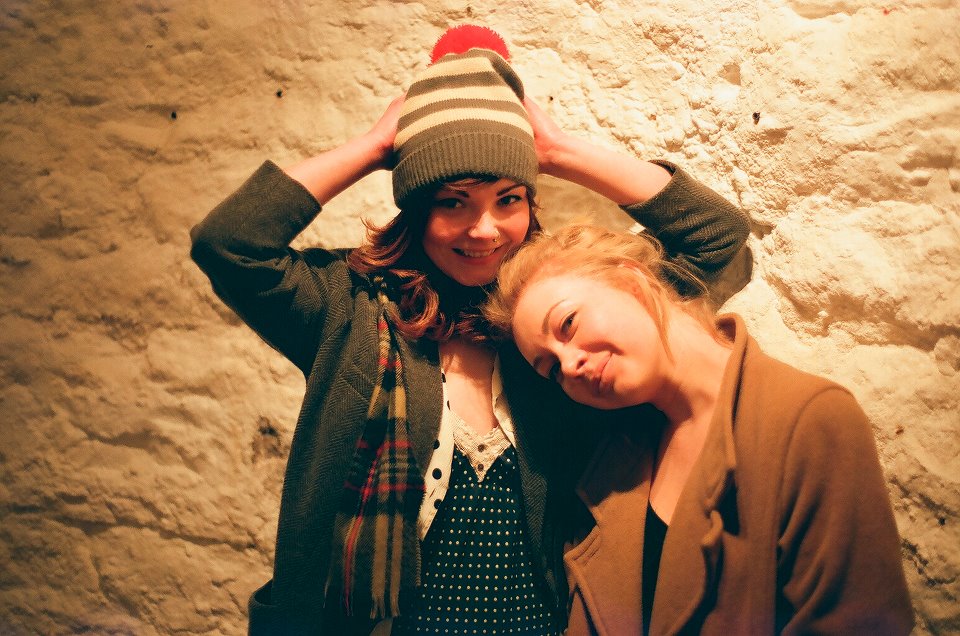 Honeyblood are a Glasgow-based two-piece consisting of Shona McVicar on drums and Stina Marie Claire Tweeddale on lead vocals and guitar. These young ladies certainly have an ear for engaging bitter sweet melodies and you could compare them to the likes of The Breeders, PJ Harvey, with the melodic sensibility of Rilo Kiley.  The duo who describe themselves quite simply as ‘ Noisy Scottish Girls’ -because we are and that’s what we do’ have just returned from America where they have been recording their début album which is  due for release in early 2014.

4. IN THE VALLEY BELOW 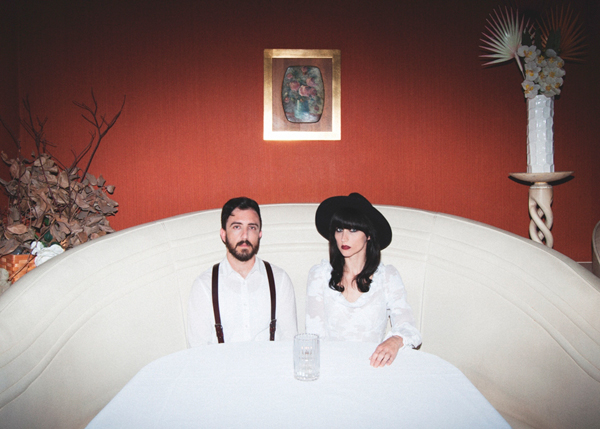 Echo Park duo, Angela Gail and Jeffrey Jacob are the lynch-pins behind In The Valley Below and they craft sultry life affirming synth driven pop.  And we stand by our statement earlier in the year that  “anybody whose lug-holes have not been beaten into submission by radio rotated big label funded homogeneous vacuum packed  SHIT should fall in love with their music …. If  In The Valley Below’s music doesn’t stir something deep inside then you are a void.” 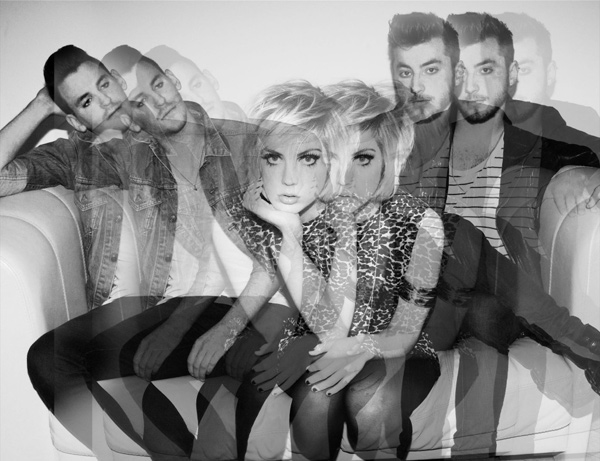 To be honest Aussie grunge heads Valentiine tipped us off about Kill Moon from Brighton who create a beguiling mix of  grungy snarling seductive hook laden alternative pop/rock.

Lead singer and Indie poster girl in waiting Izzy Bee Phillips’ sexually charged vocal delivery has all the sass and attitude of a young Shirley Manson whilst the whirring vortex of guitars and thunderous percussion is imbued with the raw intensity of The Joy Formidable.  We hope to hear lots more from them in 2014. 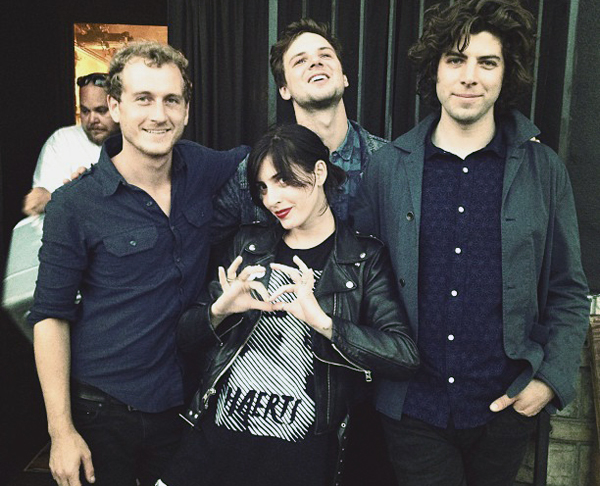 With two of the bands founding members Nini Fabi and Ben Gebert hailing from Munich, Germany,  Haerts are an intriguing mix of European electronica and vintage Americana – Like Stevie Nicks fronting Depeche Mode perhaps Nicole Atkins fronting Chvrches (another electro pop band who can’t spell ‘Hemiplegia’ is the lead track from the bands hugely impressive début EP, which contains four tracks that will have fans of classic 80′s electro pop ‘tangoing in the night’ with unbridled joy. This could be the start of something special. 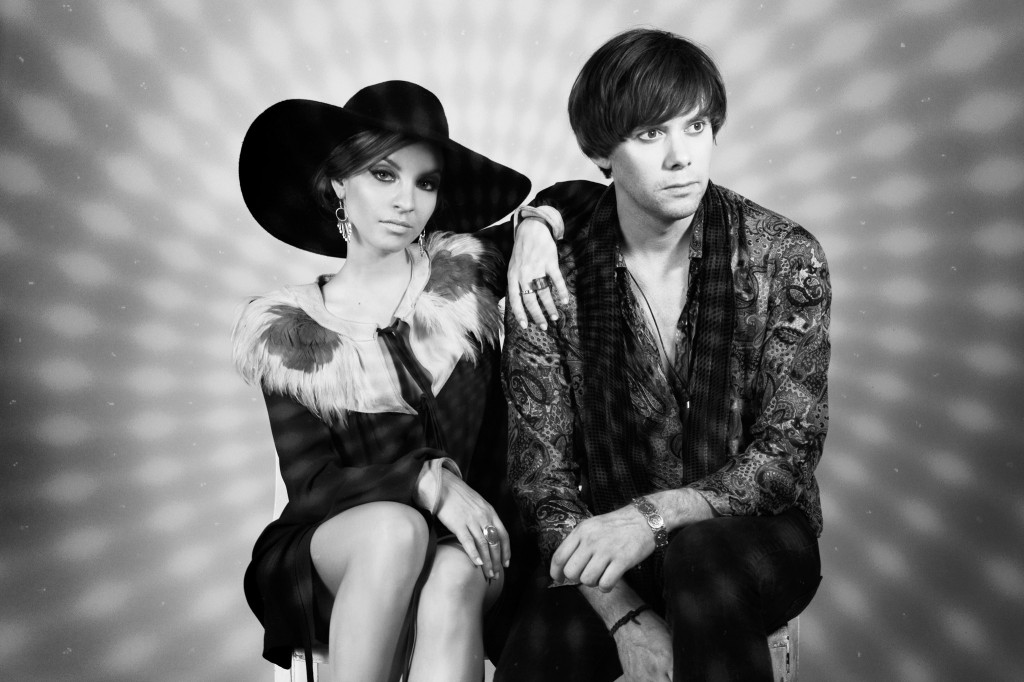 Courtly Love are a new brand quintet from East London and are one of those rare musical collectives who appear to have arrived fully formed and armed with clutch of quite wonderful tunes.  Based on the evidence we’ve heard so far they produce a gorgeous smouldering psych blues fusion, mixing the dark gutter glamour of the Velvets & Nico with the cinematic doomed grandeur of Serge Gainsborough. 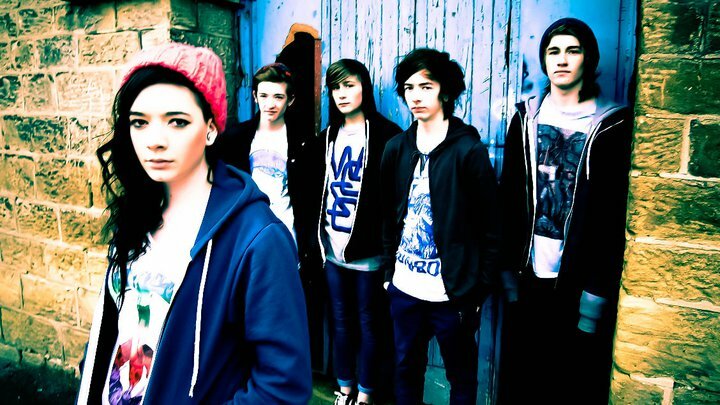 We’d been hearing a steady buzz surrounding Bingley noisemeisters, Marmozets  but it wasn;t till we heard their recent single ‘Move Shake Hide’, that the penny dropped.   It’s a blitzkrieg of fist clenching adrenaline fuelled  power, passion, attitude and crucially, melody. It showcases exactly why they’ve recently been signed to Roadrunner Records, which is also home to masked razor blade gargling freaks Slipknot.  They are about to hit the studio to record their debut album. 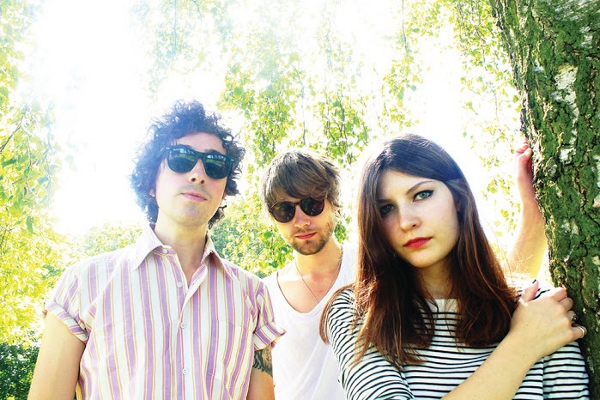 “Noise pop” trio F.U.R.S released their second single, the melodic swaggering tour-de force that is “Just Kids“ this year – a genuinely fabulous track with a sultry Chrissie Hynde meets Shirley Manson cool as fuck insouciant vocal delivery from front woman Elle Wade. And as much as we loved their debut single “Striptease” , “Just Kids” doesn’t just raise the bar, it launches it into the stratosphere. If their album, due for release later this year is half as good as this song, we’ll have a début to cherish. 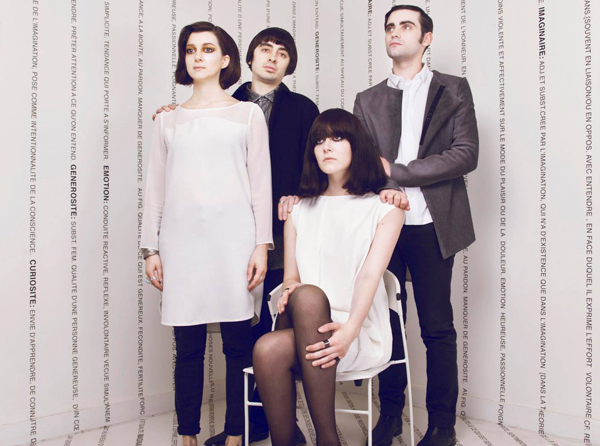 Parisian Psyche may not yet be huge in the UK, but one listen to Venera 4′s wonderful  ‘Deaf Hearts’Ep will have have you in raptures if shoegazy dream pop is your bag.  Not content with coming from one of the greatest, most inspiring cities in the world Morgane Caux, Annabelle Chapalain, Yann Canévet and Frédéric Tronel are fashioning the sort of beautiful noise that should make the musical world sit up and take note.

Named after a Russian space probe Venera 4 (Venus 4) which was launched from a Tyazheliy satellite in 1967, the band produce a gorgeous swelling dissonance of whirling guitars and driving beats, which really is out of this world 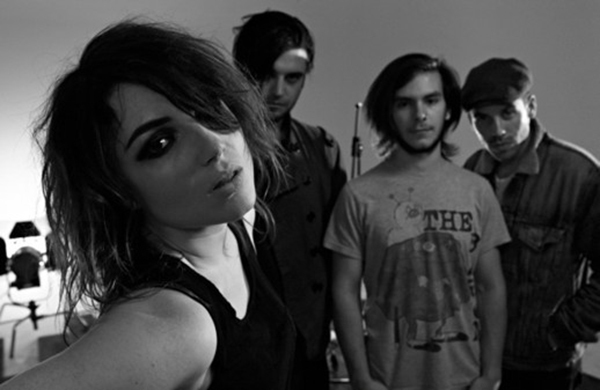 When we first heard singer Lois’ remarkable voice it was one of those explosive musical atom splitting moments inside your head when you stand slack-jawed in awe trying to mouth “WTF.”  You could compare Lois Winstone’s impassioned slightly unhinged vocals favourably to any number of iconic female artists and yet you still wouldn’t quite able to encapsulate the essence of this band.  One minute they are sculpting psychedelic space rock, the next they’re channelling the spirit of grunge. The band are currently working on their début album collaborating with the legendary Youth and if it lives up to their early promise then we genuinely believe the sky could be the limit for Lois and The Love.

Certain people bemoan the that we don’t feature local bands as often as websites who do feature local bands. Well as we previously mentioned we don’t do postcode music, we feature artists we enjoy regardless of where they are from.  And Wirral based collective The Sundowners, make the list on merit not geographic location, their recent work has had more of an air of Jefferson Airplane on amphetamines rather than Fleetwood Mac (to whom the band were initially oft compared) and they too have been busy recording their début album which should see the light of day in 2014! 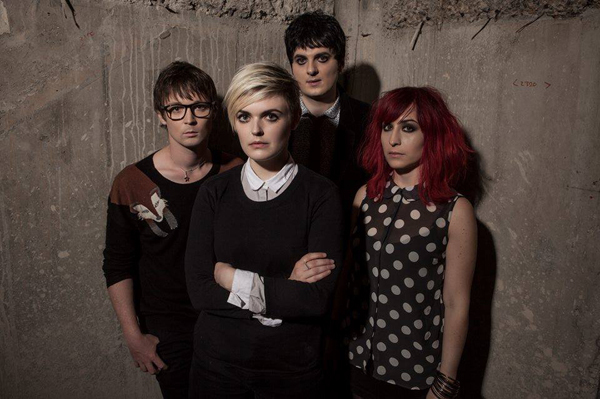 And if we were to make it a Bakers Dozen we’d include Desperate Journalist, who we’ve just started getting into and who sound profoundly wonderful! Like an epic version of the Au pairs brought up to date. Strident yet melodic, and sounding like a band who really have it all to play for! Ace!

So there you go we could go on but we won’t, as the season of the list is upon us and tomorrow sees the Blog Sound List in which around 60 UK music blogs have voted for the acts they think/hope will do rather in 2014. The good news is Haim won’t feature.