EMA’s (Erika M. Anderson) previous album ‘ Past Life Martyred Saints,’ only made complete sense for us when we saw her live a few years back.  She was for lack of a better expression quite simply f*cking amazing. And she’s back on blistering form with another new song ‘So Blonde’  from her forthcoming album ‘The Future’s Void.’

In a cultural landscape in which musicians increasingly seem to have the square root of f*ck all to say, unless it’s to get column inches, and where boundaries are meekly accepted without question, it’s nice to welcome back an artist who isn’t afraid to challenge social convention and attack the status quo.

‘So Blonde’ has the rhythmic drone vibes and beats of Beck’s early work with Erika’s hypnotic vocals taking centre stage and weave their magic juxtaposing a melodic almost serene verse with a throat exploding chorus.  The songs central theme seems to be about dehumanisation and consumption via technology as Erika explains  “The smiling blonde white woman is the most exploited image in the world”. “How many bits do we have to reduce the dancing blonde babe to before she is no longer a symbol of sexiness? At what point do tits become simply bits?  And who owns the sparkly dolphin anyway?” 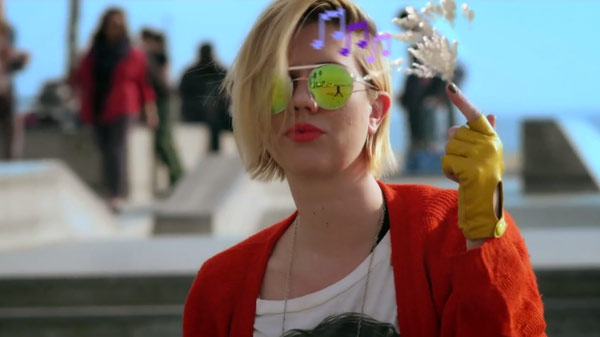 The fantastic video that accompanies the song paints a world in which the lines between reality and hyper reality have become blurred, in fact  even Matthew McConaughey ‘s ‘flashbacks’ in ‘True Detective’ aren’t as tripped out as this video.  It’s great to have EMA  back on such sparkling inventive form and we’ll stick our necks out and say it’s her best yet – bring on the album!